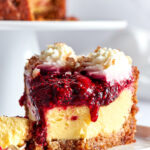 Keto Cheesecake made in under an hour! This is the BEST easy low carb cheesecake recipe you'll try. It's amazingly rich & creamy and has the most delicious keto friendly shortbread cookie crust. Best of all, each slice has only 3g NET CARBS!

First, bring the eggs and cream cheese up to room temperature

Also, at this point preheat you'll want to preheat your oven to 300 Degrees

Next, take out your food scale, a large bowl, and add all of the dry ingredients for the crust

*Note: For BEST results, I HIGHLY recommend using a food scale to weigh all of the ingredients out to the gram.

Whisk them together until they're combined

Now add all of the wet ingredients to the bowl, and mix them with a spatula until a thick batter forms

Once it does, coat a 8-inch springform pan with baking spray (or a 6/7 inch one if you'd like the crust to go up the sides of the cheesecake) and add the batter to the pan

Evenly press the dough out in the pan with the spatula, and bake it for 15 minutes

While the crust is baking add another large bowl to your food scale, and add the cream cheese and the confectioners Swerve to it

Once combined add the lemon juice, vanilla extract, and one egg into the bowl and mix again

At this point, the filling should be thick and creamy, and the crust should be done baking in the oven

So, now you'll want to turn the temperature of the oven up to 350 Degrees and add the filling of the cheesecake on top of the crust

And make sure you evenly distribute the filling in the pan, I like to use an icing spatula to help me with this

Once the filling has been added, bake the cheesecake for around 35 minutes

Ultimately you'll know it's done when the edges are set, but the middle still "jiggles" a little bit when you shake the pan

Once it cools, you'll want to cover the top of the springform pan with tin foil and refrigerate it for at least 5 hours

When the keto cheesecake has fully set, and cooled, remove it from the oven, and enjoy

About an hour before the cheesecake is chilled, you can prepare the fruit topping and whipped cream to go on top.

Put the cream cheese and heavy cream in a mixing bowl and beat them together until thoroughly combined.

Once combined add to a pipping bag and pipe on the outer ring of the cheesecake.

The "carbs" in confectioners Swerve should NOT be tracked. There are 0 CALORIES in it, and thus shouldn't be tracked into net carbs. If something doesn't have calories, essentially it can't have carbs.

Not all sugar alcohols or sugar substitutes work like this, but Swerve does.

Each slice has 3 NET CARBS: