These keto crackers are crispy, crunchy, and chock-full of cheese flavor! They're also incredibly easy and quick to make. Honestly, when you taste these you'll never believe they're low carb crackers. Dare I say they're better than store bought crackers? Well, I'm definitely confident saying that these will be the best keto crackers you ever make from scratch. That's for sure.

Simple and easy is an understatement when it comes to this recipe. And that's because these keto crackers require just 2 simple keto-friendly ingredients, and only 2 minutes to make.

Speaking of ingredients, the only ones you'll need are freshly grated parmesan cheese and some almond flour! Which, if you've been doing the keto diet for a while now, you probably have both of those ingredients at home already.

And, maybe the best thing about this cheese cracker recipe is that there's portion control built right into it. The recipe makes almost 100 crackers, and every 25 crackers has just 1 net carb.

So, you can literally eat the entire batch of crackers - which is a ton by the way - and still, only have eaten 4 net carbs!

How To Make Keto Crackers

As always, I've made a YouTube video with step-by-step instructions for you on how to make these low carb keto cheese crackers. But, I'll also give you the cliff notes version below.

First things first, you'll want to add the grated parmesan cheese and the almond flour to your food processor and just pulse those together quick.

Next, you'll want to add some water, but the amount you'll need will change depending on the moisture in your parmesan cheese.

That said, I recommend adding a teaspoon of water at a time, and pulsing the ingredients together after every time you add some. You'll know you've added enough water when thicker clumps of dough - the size of BB's - start to form in the food processor. In my experience, 2 teaspoons of water is enough to make this happen.

As a lot of you know I love to use almond flour in a lot of my recipes. And today's keto cracker recipe is no different.

My favorite to use is this Almond Flour From Kirkland's. It's relatively inexpensive, and it has just 2g net carbs per serving.

And that's certainly the lowest carb count that I've come across for almond flour.

Can you replace the almond flour in this keto cracker recipe?

"But Joe, what about replacing the almond flour with coconut flour?"

Coconut flour is far too absorbent and can never be substituted on a 1:1 basis with almond flour.

Are these gluten free keto crackers?

Almond flour obviously is gluten free, and so is parmesan cheese.

So, if you're looking for an easy gluten free cracker recipe, this is it!

Getting These Keto Crackers Crispy

In my opinion, the number one requirement for a good cracker is that it's crispy and crunchy.

If it's not that, I'm not wasting my calories on it.

That said, the secret to making these keto crackers crispy is cooking them in the microwave. Seriously, using the microwave really crisps these up. And the crackers end up having an unbelievable crunch to them.

The reason this happens is that microwaves warm up the water molecules in food. And with recipes like this, the water evaporates, and almost "dehydrates" the dough. And the result of this cooking method is a crispy keto cracker.

Cooking these low carb cheese crackers in the oven

Well, I tried this.

And I'm going to be honest with you, it's not as good as cooking them in the microwave.

The edges cook too quickly, and the middle doesn't cook enough. Which means you have to constantly keep an eye on them, and continually remove the "cooked" crackers from the baking sheet.

That said, you can totally cook them in there, but I don't recommend it.

If anything, try using your air-fryer if you've got one!

Seasonings For these keto crackers

Like I mentioned earlier, these keto crackers might be better than any store bought ones you've had.

And just plain, I think they give Cheez-it's a run for their money.

But the brilliant thing - and the best thing - is that these crackers can be tailored to your mood/cravings.

Just add a little baking spray to the tops of them when they're done cooking, then add the seasonings of your choice, and you're in business!

My personal favorite seasoning is the "Everything But The Bagel" one by Trader Joe's.

But, I also like a good Cool Ranch keto cracker too. To make that one, I just add a little salt, onion powder, garlic powder, and dried chives.

It's unreal....and I hope you give these low carb keto crackers a shot!

Other Easy Keto Recipes In 5 Minutes Or Less

The blog is filled with tons of easy keto recipes just like this one.

So if you haven't tried these recipes yet, give them a shot! 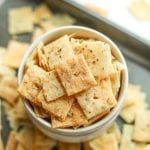 These keto crackers are crispy, crunchy, and chock-full of cheese flavor! They're also incredibly easy and quick to make. Honestly, when you taste these you'll never believe they're low carb crackers. And I'm confident saying that these will be the best keto crackers you ever make from scratch.

Add the almond flour and cheese to your food processor.

Add the water one teaspoon at a time until small balls/clumps of dough start to form in the processor.

Now transfer the clumps of dough to a bowl, and use your hands to form a ball of dough out of them.

Next, you'll want to use a rolling pin and roll out ½ of the dough at a time BETWEEN 2 SHEETS OF PARCHMENT PAPER.

Once the dough JUST STARTS TO LOOK TRANSLUCENT that's when you know you've rolled it out enough.

Now use a pizza cutter to cut the dough vertically and horizontally to form the crackers.

Once the crackers are shaped, use a toothpick to form a hole in the center of each cracker.

Use a pair of kitchen scissors to cut away the extra parchment paper from the dough, and then transfer the dough to a plate.

Microwave the crackers in 2, one minute intervals...off-set the plate on the left side for the first interval, and then off-set it on the right side for the second one.

***NOTE*** Microwave times will vary depending on the power of your microwave. My Microwave is 1100 Watts and this is the perfect cook-time for me.

Let the crackers cool for atleast 5-10 minutes after they're done cooking.

They will be soft when the come out of the microwave, but once they have time to cool they crisp up.

Once they do crisp up, you'll want to break them apart into individual crackers, coat them with baking spray, and then add the seasonings of your choice to them.