This Instant Pot Orange Chicken Recipe is incredibly simple and easy to make. It takes less than 20 minutes to whip up, and it's got all the flavor of "normal" orange chicken, without all the carbs. Plus, you can make this healthy keto approved recipe in more than just your instant pot...you can make it in your crockpot too!

Ah, orange chicken; one of the staple Chinese food selections that makes everyone go crazy for Panda Express and similar restaurants.

The only trouble is that lots of tasty Chinese food tend to be high in carbohydrates.

But we're all about good news, which is why we're here to tell you that you can make low-carb, tasty keto orange chicken right in your own home!

Done right, this healthy orange chicken recipe will taste just as good as the regular thing. And, the best news of all, you don't need a ton of ingredients to make orange chicken keto either.

How to Make Orange Chicken for Keto and in an Instant Pot!

Now that you see the ingredients laid out all organized above, let's dive in, so you know how to make instant pot orange chicken that's keto approved!

To start, season the chicken with the salt and black pepper described above.

Like with all the recipes we go over, feel free to adjust the amount of salt or pepper to your liking. The above amounts are just a great baseline in case you aren't sure.

Set your Instant Pot to "sauté" mode, which should be configurable on the central console or control panel.

You can heat the sesame oil inside the Instant Pot itself for about one minute.

Then brown the chicken within the Instant Pot in batches. Depending on how deep your pot goes, you might be able to do all of the chicken in a single session.

Otherwise, opt to make it in small batches instead.

The reason you don't want to overfill the pot is that crowding the pan will cause the meat to steam instead of browning properly.

You can alternatively make the chicken golden brown by doing this on a stovetop. It all depends on how much effort you want to put in.

If doing on a stovetop, use some oil as well to prevent the chicken from sticking.

Next, combine all of your sauce ingredients in a medium bowl except for the xanthan gum (this will be added later).

Be sure to mix the sauce ingredients thoroughly with a spoon or similar utensil, then add the mixture to the pot and deglaze it (i.e., scrape all of the caramelized chicken bits stuck to the bottom with a wooden spatula).

Take your time during this part to maximize the flavor you can enjoy with your keto orange chicken; remember that this sauce is supposed to be traditionally quite thick.

It might be wise to prepare your sauce mixture before even beginning the chicken.

It depends on how fast you are at gathering the ingredients and mixing it all together.

We'd recommend doing the sauce mixing first when you're practicing this recipe, then doing it at the same time when you get better.

This way, you won't be rushing when the chicken is ready, but the sauce is not!

Now, after you've deglazed the Instant Pot, it's time to cook the orange chicken.

The chicken actually cooks incredibly quick - five minutes on high pressure is all you'll need to cook it for.

Once the cooking is done, release the pressure and let the scent waft through your kitchen.

Now you want to select the sauté mode once again, and it's finally time to add the xanthan gum.

Mix everything together extremely well in the Instant Pot; this will determine the final texture of your orange chicken for keto more than anything else.

If you mix it well, the resulting recipe will taste great, but if you mix it poorly, the sauce might come out a little chunky, or it may not be the right consistency all.

That said, you'll want to let the sauce bubble and thicken for about two minutes once it's mixed.

This should produce the desired consistency of traditional orange chicken but with keto-friendly ingredients!

You can then serve the instant pot orange chicken over salad leaves or cauliflower rice (or any other kind of dish you prepared to eat with the orange chicken).

Garnish it with the green onions for an added flavorful touch and a few aesthetic bonus points.

You've just made the best instant pot orange chicken recipe of your life.

A common question is if oranges are keto friendly.

And, it kind of depends.

Oranges themselves shouldn't be consumed in "normal" quantities if you're following the keto diet.

However, this recipe makes 4 servings, and we're only using 1 orange to make this keto orange chicken recipe. Also, the orange itself is the only source of carbs in the recipe.

So, in this instance, I'd say yes eating an orange - or some of an orange - is ok if you're following the keto diet.

The quantity consumed per serving is so small that you should have no problem fitting this into your keto diet.

Actually, every serving has just 2.5 grams of net carbs!

So don't worry about eating a serving or two of this Orange Chicken.

It will not kick you out ketosis.

That said, you probably don't want to eat an entire orange in one sitting or multiple oranges.

So, really, moderation is key here.

Ok, so if you don't have an Instant Pot - or you just want to come home to the finished recipe - you can also make this orange chicken in your crockpot.

You'll still want to brown the seasoned chicken in a pan before you finish cooking it in the crockpot.

Of course, you'll want to use sesame oil to help you brown the chicken. Using Sesame oil infuses that classic Asian flavor into the orange chicken that other oils simply won't provide.

Once the chicken is browned, transfer it to your crockpot, and pour in all of your sauce ingredients except the xanthan gum. Leave that out, and only add it if the sauce isn't as thick as you'd like it to be when the chicken is finished cooking.

Speaking of cooking the orange chicken, it'll take about 2-3 hours on low, or around 1 hour on high.

Again, if the sauce isn't as thick as you'd like it to be, just add ½ to 1 tablespoon of xanthan gum to thicken it up.

So, as I mentioned earlier, this orange chicken recipe has just 2.5 grams of net carbs per serving.

But, it's actually a pretty low calorie orange chicken recipe too. Each serving has less than 300 calories, and that's almost unheard of for orange chicken!

Checkout the full nutritional breakdown per serving below...

So, this keto orange chicken recipe allows you to indulge in your Chinese food cravings without having to break your keto diet obligations.

In fact, being unable to partake in some of our favorite foods is one of the hardest parts of maintaining an effective keto diet.

But recipes like this low-carb orange chicken one make it so that you can enjoy your Chinese cravings guilt-free.

We like to even call making recipes like this one, "take-out fake-out night". Basically, it's just using a recipe that you craft in your own kitchen without actually ordering from a restaurant!

Although, you can also freeze it in an airtight freezer bag or a freezer-friendly dish.

If you freeze it, it can last up to a couple of months.

However, for the best tasting results, we recommend eating it within just a couple of days after making it.

If you enjoyed tody's low carb keto orange chicken recipe, you might want to check out some of these other keto dinner ideas... 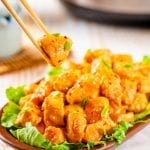 This Instant Pot Keto Orange Chicken Recipe is incredibly simple and easy to make. It takes less than 20 minutes to whip up, and it's got all the flavor of "normal" orange chicken, without all the carbs. Plus, you can make this healthy recipe not just in your Instant Pot, but your crockpot too!

Brown the seasoned chicken in a pan with the sesame oil.

Once the chicken is browned, transfer it to your crockpot, and pour in all of your sauce ingredients except the xanthan gum.

Cover the crockpot and cook for 2-3 hours on low, or around 1 hour on high.

Only add ½ to 1 teaspoon of xanthan gum if the sauce isn't as thick as you'd like it to be when the chicken is finished cooking.