If you love a rich, buttery, southern cornbread recipe, then you're going to love this keto cornbread! It's got all of the flavors, tastes, and textures, that you'd expect from a classic cornbread recipe, but not all the carbs. Plus, it's just so easy to make...maybe a little too easy actually!

First off, is corn keto friendly?

Corn has too many carbs to be acceptable for the keto diet.

I mean, in every cup there's a whopping 24g of carbs in corn.

And that's obviously way too high if you're following the keto diet.

How To make cornbread keto

It’s quite simple, use corn extract instead of real corn!

If you’ve followed my blog for a little while, then you know using extracts is one of my favorite ways to add flavors to recipes without adding the carbs.

And, probably, the best example of this was when I used a banana extract to make keto banana bread. The extract gave the loaf all the flavor without me using real bananas to do it.

That said, for our keto cornbread recipe, we’ll use a sweet corn extract to give the cornbread the same flavor you would expect from a “regular” recipe.

And, again, the extract will help us do that without adding the additional carbs.

So, the good news is that other than using corn extract, all of the other ingredients used to make this cornbread are very standard keto ingredients.

You probably have all of those ingredients at home already...all except the cornbread extract anyways.

By the way, it's really worth picking some of the extract up.

And I say that because you can use it in more than just this keto cornbread recipe. I have an AMAZING keto tortilla recipe, and if you add corn extract to the tortillas you can make them taste like corn tortillas.

Next, add all the wet ingredients – including the eggs, egg yolks, salted butter, heavy cream, and cornbread extract – into a medium to large-sized bowl.

Just make it a bowl that can hold all the ingredients without spilling anything during mixing.

We’ve found that doing the eggs first is the easiest way to get things going. Another good tip is the leave the butter out at room temperature for a little bit before starting; it makes mixing the butter around so much easier than trying to mash up refrigerated stuff.

Anyways now you’ll want to mix all the ingredients until they’re well combined. You want the eggs to dissolve fully into the cream and butter. And if you’ve done this correctly you’ll end up with a thick yellow batter.

Also, mixing those liquid ingredients well is critical, as you’re about to add several dry ingredients that will soak up the moisture present in the mixture. If the batter is too dry before you begin baking, the cornbread will end up crumbly and unappealing.

By the way, I like to sift my coconut flour into the cornbread batter. Coconut flour can sometimes be "clumpy", and using a mesh strainer to sift it into the batter can help reduce clumping. So, consider doing this if you've got a sifter!

Anyways, once you've added all of the ingredients, you can either mix everything together by hand or use an automatic mixer.

All told, mixing everything should take between 5 to 10 minutes if you’re being thorough.

Next, place a sheet of parchment paper on an 8x8 baking tray.

Coat this sheet with baking spray or a similar lubricant, then add the corn bread batter.

As you pour, take special care to distribute the mixture around the tray evenly.

Using a spatula works great and allows you to get rid of any lumps or spread the batter around without removing too much as a side effect.

Now, after the batter has been spread around the tray, bake the cornbread for 45 to 50 minutes.

You can check the cornbread several times over the process but don’t open the oven door too often or you’ll cool things down. Using your oven window and the interior light is a great idea to see where things stand.

You can also use these to check on the cornbread and make sure that it doesn’t brown too quickly. If it does, don’t freak out! Just cover it with a piece of tinfoil for the last 10 minutes of cooking time. Covering it will prevent the top of the cornbread from becoming too hot and essentially slow down the cooking process.

Once you can insert a toothpick in the center of the corn bread and it comes out clean, remove it from the oven, and let it cool down completely while still on the tray.

This will take anywhere between 15 minutes to a half-hour depending on your ambient room temperature.

Now, this keto cornbread is meant to be enjoyed on the day of baking, and while the cornbread is about room temperature, if it’s too hot, some of the texture and flavor can be "off".

For whatever reason, I've noticed that if I try to eat it right out of the oven, it tastes a little "eggy". But, when I let it cool down to room temp before eating it, the cornbread tastes perfect.

That said, I actually prefer keeping the cornbread out overnight, cut into slices & uncovered, and then eating it the next day. I've found doing this results in THE BEST tasting keto cornbread.

Also, leaving it out does two things: one, it cools down the cornbread even further and allows the bread to solidify fully, and two, it improves the consistency of the cornbread and makes the flavor even better.

However, you can definitely heat it up in the oven if you like to eat your cornbread hot.

Be aware; however, that cornbread that’s heated multiple times will eventually become dry and crumble to a kind of cornbread dust.

So just warm-up the amount of cornbread you think you'll be eating at that particular sitting...and save the rest to warm up for another occasion.

We’re not here to judge, though, so eat it however you like it best!

Normal cornbread lasts for about 3-4 days, and this delicious keto cornbread recipe is the same way.

That said, you’ll want to cut it up into slices - or squares - even before you’ve left it out overnight.

Anyways, once you've left it out overnight, you can keep it in the fridge for the following days.

Honestly, though, we’d recommend just chowing down and munching away on the cornbread over the first couple of days after baking.

Other Recipes To Make This Keto Cornbread with

Another good idea is to combine the keto cornbread with meals where you’d normally miss bread or carbs in corn.

Personally, my favorite way to eat this cornbread is with a big bowl of my keto chili.

I mean, there's just something addicting about the combination of sweet moist cornbread mixed with the savory spiciness of chili.

And that's especially true on a cold day...which we have a lot of here in Buffalo.

Anyways, I hope this keto cornbread hits the spot for you.

It tastes pretty darn similar to a "normal" recipe, and I hope it helps you maintain your nutritional goals and stay committed to keto. 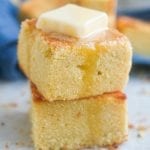 If you love a rich, buttery, southern cornbread recipe, then you're going to love this keto cornbread! It's got all of the flavors, tastes, and textures, that you'd expect from a classic cornbread recipe, but not all the carbs. Plus, it's just so easy to make...maybe a little too easy actually!