I know what you're thinking, "Joe banana's are filled with sugar, so how can you make banana bread low carb?"

And the answer is very simple. We're not actually going to use bananas to make our low carb banana bread.

Once again, I know what you're thinking, "So then how is this banana bread going to taste like bananas?"

And, uhh, that's a simple answer too. We're going to use sugar-free banana extract to pack the banana flavor into this keto banana bread.

Yep, and this banana-less banana bread recipe is going to taste just like "normal" banana bread. It's actually kind of mind blowing how close it tastes to the "real thing".

Especially, when you consider the fact that each slice only has 2g net carbs!

How To Sweeten Up The Low Carb Banana Bread

Now, even-though the banana extract is going to give our bread a ton of flavor, it isn't going to provide any sweetness to the loaf like typical bananas would. So, to add sweetness - without adding carbs - to our low carb keto banana bread, we're going to use erythritol.

Erythritol is a 0 carb, 0 calorie sugar substitute that has no impact on blood sugar levels. This makes it the an ideal sweetener for people following any kind of low carb diet, such as the keto diet.

Another way we're going to sweeten the keto banana bread up is by using a little 0 calorie - and 0 carb - maple syrup. I prefer this pancake syrup by Walden Farms. It adds a nice punch of sweetness to the banana bread, but also a hint of maple flavor as well. And it does it without adding any carbs!

Almond flour is a wonderful low carb substitute for normal flour, and the Kirkland Blanched Almond Flour has only 2g net carbs per serving. Normal flour has 10 times that amount.

The crazy thing is that even-though almond flour is used as the base of the bread, the texture of it is much more like one that uses "normal" flour. This low carb banana bread is moist, crumbly, and dense! It's absolutely divine. 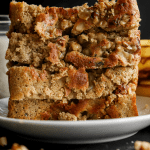 The BEST Low Carb Keto Banana Bread Recipe! This moist and dense "banana" bread isn't actually made using bananas, but by using banana extract and a few other ingredients like almond flour, eggs, and erythritol. It's incredibly easy to make, and each slice of this banana bread ONLY HAS 2 NET CARBS!

Macros don't account for the erythritol sweetener, it has ZERO CALORIES, and thus should be tracked as 0 carbs as well.