This chicken crust pizza has such a close texture to regular pizza, and it has a delicious flavor to it too. But, more importantly, it has 0 CARBS! However, this isn't just a zero carb pizza crust recipe, it's a high protein one too. The crust itself has over 100 grams of protein. So, if you've been looking for the best low carb, high protein, chicken crust pizza recipe, well, you've found it!

When it comes to low carb pizza, I'm sure you've heard of fathead dough or maybe even tried my keto pizza recipe.

And although those are pretty tasty, get ready to have your mind blown because this chicken crust pizza is better than any other keto pizza crust you can make - at least it is from a carb standpoint

It is made with ground chicken and just 4 other simple ingredients, and it is out of this world delicious.

This chicken pizza crust has the perfect balance of doughiness and crispiness with a real pizza texture and delicious flavor. Now, the crust does taste a bit like chicken - at least when you eat it hot - but it's so good. With that said, I highly, HIGHLY, recommend trying the pizza when it cools down - or even when it's cold - the chicken flavor is almost unnoticeable, and you'd swear you were eating a "normal" crust!

The craziest part is this chicken crust pizza recipe has 0 NET CARBS, and it is super high in protein! And if you add cheese, sauce, and pepperoni, each slice of pizza will still only have 1 total carb.

This recipe is just insanity, and I seriously can't stop making it. And after you try it, I have a pretty good feeling that you'll be hooked too.

Oh, and if you want the best pizza night experience, I highly suggest making these air fryer wings to go with it. There are three different flavors, and you can make them while the pizza is cooking!

So, as I mentioned, you'll only need a few ingredients to make this chicken crust pizza.

Here's everything you'll need for the chicken pizza crust:

And to complete the keto pizza:

So, I like to use 99% fat-free (lean) for the chicken because it gives the crust a better texture. You can use any ground chicken, and the crust will still turn out great, but I have found that this works best.

Now, the garlic salt and onion powder are optional to use for the crust, but they will give it a delicious flavor.

HOW TO MAKE CHICKEN CRUST PIZZA

Another reason I love this chicken pizza crust recipe, and can't stop making it, is because it is so easy.

It is way easier to work with than fathead dough and takes less time too.

So, if you're ready to have your mind blow, get out your ingredients, and let's make the best keto chicken crust!

Then while that's preheating, take out a bowl, crack the eggs, and add them to the bowl. Whisk the eggs until the whites combine with the yolks and set the bowl aside.

Next, take out a large bowl and add the unflavored whey protein powder, parmesan cheese, garlic salt, and onion powder. Whisk all of those ingredients until they combine, then set the bowl aside.

Now, remove the ground chicken from the package and pat it with paper towels until it is completely dry.

Then put the ground chicken in a bowl and add in the dry ingredient mixture that you just prepped.

Now, incorporate the dry ingredients into the ground chicken with your hands and once they're combined, add in the whisked eggs from earlier.

Then take out a spatula and mix everything to work the eggs into the chicken. And this process will take a couple of minutes, but eventually, the chicken will absorb the egg and turn into an almost thick batter consistency.

Once you have that consistency, line a 14 inch (or bigger) pizza pan with parchment paper and pour the chicken crust batter onto the sheet.

Then use a spatula to work the batter around the sheet and spread it out to make a 12-inch pizza crust.

After the crust is good to go, put it in the oven and bake for 15 minutes.

While the keto chicken crust pizza is baking, you can make my super quick sugar free and low carb pizza sauce.

First, add ½ cup of tomato sauce to a bowl and sprinkle in a little garlic salt and onion powder. Then, add a little olive oil to the sauce, and I like to add a little 0 calorie sweetener, but that's totally up to you.

By now, the chicken pizza crust should be finishing up in the oven. And when it is done, you'll want to let it cool down a bit before making your pizza.

Once it cools, flip the pizza crust over and spread the sauce on it. Then top with mozzarella cheese and some pepperoni.

After all of the toppings are on the crust, pop it back in the oven for about 15 more minutes, just until the cheese starts to melt.

Then I like to finish the pizza on broil until the cheese totally melts.

Finally, after the pizza is cooked to perfection, take it out of the oven, cut into 8 slices, and dig in!

Now, I made a classic cheese and pepperoni pizza, but you can top off this low carb pizza crust with literally anything you want!

Get creative with your toppings and use my keto BBQ sauce or keto alfredo sauce as the pizza sauce.

Or you could put this keto spinach and artichoke dip on it and even just use the crust to dip into this keto cheese sauce.

Anyways, you get the point - the possibilities for this ground chicken pizza crust are endless.

So, this chicken crust pizza recipe makes 8 slices, depending on how big you cut them.

And since this is a 0 carb pizza crust, it might be tempting to eat the entire thing.

But, if you have some leftover, you can store it in an airtight container or wrapped tightly in plastic wrap in the fridge for 3-4 days.

Then to reheat the keto chicken crust pizza, check out all of the best ways here.

One of the best parts about this keto chicken pizza crust is baking it ahead and freezing it! It makes for such a quick and easy dinner, and it's ten times better than any other frozen pizza you'll find at the store.

If you want to make it ahead of time, just bake the crust as described earlier and let it cool completely. Once it cools, wrap the crust tightly in plastic wrap and store it on a flat surface in the freezer for up to 3 months.

Then whenever you're craving some of this delicious keto chicken crust pizza, just let the crust thaw in the fridge, add the toppings of your choice, and bake until the cheese melts and the pizza is warm.

A chicken crust pizza keto style doesn't get any better than this one. And since the ground chicken pizza crust has 0 NET CARBS, you can put any toppings you want on it and still have it be keto friendly.

Along with all of that, the crust is insanely delicious and is pretty darn close to real pizza dough. If you make this and share it with your friends and family, they won't have a clue that the crust is made with chicken.

I seriously can't stop making this keto chicken crust pizza, and I hope you enjoy it as much as I do! If you make it, leave a comment below and let me know what you think, I'd love to hear.

If you're looking for some more dinner recipes that are super low carb and super delicious, I have a bunch on the blog that I think you'll enjoy just as much as this keto chicken crust pizza.

Try making one of these next:

Oh, and for another super easy keto chicken recipe give these low carb chicken nuggets a shot! 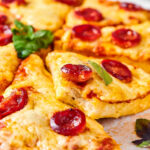 This chicken crust pizza has such a close texture to regular pizza, and it has a delicious flavor to it too. But, more importantly, it has 0 CARBS! However, this isn't just a zero carb pizz crust recipe, it's a high protein one too. The crust itself has over 100 grams of protein. So, if you've been looking for the best low carb, high protein, chicken crust pizza recipe, well, you've found it!