This keto pizza recipe is about as easy as making homemade pizza gets! And, I may be a bit biased, but I honestly think this is the best keto pizza you can make. The crust is crisp, the sauce is delicious, and the cheese, well, it's cheesy! Not to mention, each slice of this keto pizza has just 3 NET CARBS.

I know, that sounds impossible, but it isn't.

It's actually REALLY easy to make keto pizza this quick, and it's REALLY delicious too.

All you have to do is add your ingredients to a large bowl, mix them up into a ball of dough, roll that ball out, add your sauce, add your cheese, add your toppings, and bake. Yep, it's that easy to make a keto pizza from scratch!

By the way, if you're making this keto pizza recipe, you might as well make some of these air fryer chicken wings to go with it!

Now, as you already know from the title, I think this keto pizza recipe actually puts fathead pizza to shame.

Ok, that might be a tiny bit of an exaggeration, but I do think it's quite a bit better and is definitely one of the best keto recipes you'll find.

Fathead pizza dough is by far the most popular way to make keto pizza, but that doesn't mean it's the best way. See, the thing about making a fathead Pizza Crust is that it takes more time to make, and is much heavier and dough-y.

I mean this keto pizza crust, it literally tastes like the regular one. And you can't always say that about fathead pizza dough.

I honestly don't think you'll find a better keto pizza crust than this, but you'll have to see for yourself.

Anyway, the main reason the crust is so good is the ingredients. There's actually no cheese used to make this keto pizza crust like there is in fathead pizza crust. And that is what I think makes the keto pizza recipe so legit.

So here's what we'll be using to make this keto pizza crust recipe:

If you don't have one or two of these ingredients I highly recommend picking them up. I actually use a lot of the same ones to make a bunch of different keto recipes, one of which is my FAMOUS 2 MINUTE KETO BREAD. And, let me tell you, it's worth getting those just for that recipe alone.

The Best Almond Flour To Use For Your Keto Pizza

Almond flour is by far my favorite low carb keto friendly flour substitute. And it's actually what the base of today's Keto Pizza Crust Recipe is made out of.

You can use it in so many different recipes and have amazing results. It mimics regular flour unbelievably well. So much so, that if you didn't tell someone the base of this keto pizza recipe was made with almond flour, they probably wouldn't know!

As far as the brand of almond flour I like to use, I like the Kirkland’s Blanched Almond Flour.

The reason I like Kirkland’s is because it's MUCH cheaper than other brands, and it has the lowest amount of net carbs per serving. Every 28 grams of that almond flour has just 2 net carbs!

Other Flours To Consider Using

If you wondering if you have to use almond flour, the answer is no.

But, if you want to replace it, I recommend doing so with either sunflower seed flour or walnut flour.

Both of these flours are totally low carb and keto friendly, and they substitute perfectly with almond flour.

Almond flour and coconut flour have different absorption properties, and you should NEVER substitute one for the other in ANY recipe, especially today's keto pizza recipe.

Coconut flour absorbs liquids at a much higher rate than almond flour does, it's like a sponge. And adding too much coconut flour is the easiest/fastest way to dry out a recipe - or even worse ruin it.

The protein powder really gives the keto pizza crust a nice chewiness and makes the texture of the crust more legit.

However, if you'd like to replace the protein powder to make this keto pizza crust you can.

And, as I mentioned above, all you have to do is add more almond flour in its place. That said, just use 30 more grams MORE almond flour to make your keto pizza crust instead of the protein powder.

That means you'll need to add 1 ¾ cups or 198 grams of almond flour for your keto pizza in total if you're going to skip the protein powder.

However, if you want to replace it with butter, or olive oil, you totally can. Many readers have done this with great success.

Having said that, I recommend using refined coconut oil because it will give your keto pizza crust the best texture possible. There's just a certain chewiness that coconut oil gives to the crust that the other options don't give.

How To Make Keto Pizza

But the keto pizza crust we're making today comes together rather effortlessly. That is why I think this is one of the best keto pizza recipes -and one of my favorite recipes - but I guess you'll have to see for yourself.

By the way you can put any toppings you want on this keto pizza. My favorite change-up is using this 0 carb bbq sauce and shredded chicken to make a bbq chicken pizza

Ok, enough talking, get the out the ingredients and let's get cooking!

As I mentioned before, all you have to do is add the pizza ingredients to a bowl, mix, and then presto-change-o a ball of dough forms!  It doesn't get easier than that, does it?!

Then, once you form that ball of dough, you can preheat your oven to 425° Fahrenheit.

Next, roll the dough out into a 12" crust, and you will precook it for a few minutes before adding your toppings.

And this crust cooks quick - like less than 5 minutes quick - so you'll want to keep an eye on it. You'll know it's done when the outer-crust just starts to turn lightly golden.

Once the keto pizzas crust is looking good, you're ready to add your sauce, cheese, and toppings!

Then all you have to do is pop it back in the oven, and broil it at 500° Fahrenheit until the cheese melts. Which by the way, only takes about 3 minutes.

Also, during this broiling process, the edges of the crust get nice and crispy. So, don't skip this step! It's the key to getting a super crisp crust on your keto pizza.

After it cooks to perfection, take it out of the oven, slice, and enjoy!

How To Store Cooked Keto Pizza

So, this keto pizza recipe will make about 8 slices of delicious low carb pizza. And if you make this for a family dinner, I guarantee there won't be anything left!

But if you're just making this low carb pizza for yourself, you should have a few slices leftover. If you do, consider yourself lucky because it's delicious days after making it!

How To Reheat Keto Pizza

So, you can enjoy the leftover pizza either cold or reheated

The best way to reheat the low carb pizza is in the oven. Preheat the oven to 350°F and either put it on tin foil directly on the rack or heat a sheet pan as the oven heats up.

Then bake the pizza for about 10 minutes or until it reaches your desired temperature.

You can reheat the low carb pizza in the microwave for a quicker method, but it won't turn out as crispy.

That is how to make keto pizza in just a few simple steps!

This keto pizza comes out tasting as if you ordered it from your favorite pizza spot. The low carb pizza crust is thin, crispy, and perfectly chewy, and you can add on any of your favorite toppings to complete the best keto pizza ever!

I am addicted to making this pizza and it's one of my favorite recipes to make whenever I'm hosting. Of course, everyone always loves it and has no clue that it's low carb pizza!

So I hope you like this low carb pizza recipe as much as me and my family and friends do. If you make it, leave a comment below and let me know what you think! And make sure to check out my Youtube channel for more keto recipes.

If you enjoyed today's low carb keto pizza there are quite a few other really tasty keto dinner recipes on the blog.

Here are some of my favorite keto recipes:

Oh, and by the way, since pizza and beer go together like buttons on a shirt, you might want to check this list I put together of the best keto beers you can buy. There are over 30 beers on the list and they all have less than 5g of net carbs per serving! 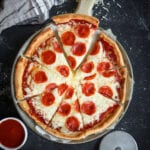 Keto Pizza in just 10 MINUTES! This is seriously the BEST Keto Pizza recipe. The crust is made with almond flour, and just a few other ingredients, and it SO MUCH BETTER than fathead pizza crust. This keto pizza crust actually gets crispy, and crunchy like REAL pizza crust does. It's totally delicious, totally low carb, and totally keto approved!

*NOTE: If you're NOT using the protein powder you'll want to replace it with 30 grams more of almond flour. So, you'll want to use 1 ¾ CUPS (198g) Blanched Almond Flour for the crust instead of 1 ½ cups.

Remember to subtract the fiber from carbs to get NET CARBS.