This keto bread recipe is a game changer if you're following the keto diet. That's because every slice has less than 1g NET CARBS, and it tastes damn close to "normal" white bread.

There are a lot of different ways to make bread for the keto diet, but I think this is the best keto bread recipe I've made yet. A lot of times I think keto bread recipes ends up tasting too "eggy"... at-least for my taste anyways.

And even-though we'll be using quite a few eggs for today's almond flour keto bread, there isn't much of that "eggy" flavor to it. Really the only thing that brings out a little egg flavor is toasting it to be honest.

You know the consistency I'm talking about...it's that soft, airy-yet-spongy center with a pull-apart crust.

And I love, love, love that consistency. It's why I crave bread.

Well, this almond flour keto bread has that!

How To Make Keto Bread (Video) 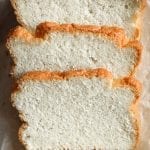 The BEST Keto bread recipe you'll ever try, and it's so easy to make! Each slice of this keto bread has less than 1 net carb, and it actually tastes like store bought white bread!

I recommend toasting the keto bread in a pan on the stove top, instead of using a toaster/toaster oven. For whatever reason, it doesn't toast as well in them.

If you do toast the keto bread it will bring out a slight "eggy" taste to the bread that isn't there if it's not toast just FYI.