This Keto Cream Of Mushroom Soup Recipe is so rich and so creamy, and it's jam-packed with umami! Seriously, this hearty, earthy soup is one of the best creamy keto soup recipes you can make. Not to mention, you'll never believe every cup has just about 4 NET CARBS, and it takes only minutes to make!

The cold weather of Fall has finally made its way to Buffalo. And that means soup season is here too!

So, today, I'm sharing one of my absolute favorite creamy keto soup recipes with you - Keto Mushroom Soup!

This soup is so deliciously creamy, and it's full of tender pieces of mushroom.

The broth has bold notes of garlic, onion, and herbs that perfectly complement the more earthy mushroom flavors. And the ingredients are easy to find ones that you probably already have at home!

What's not to love about that?

That said, let's jump into the recipe, and I'll show you how to make the best keto creamy mushroom soup!

Ok, so, this dish focuses heavily on umami - the Japanese term for savory.

And, let me tell you, there's a lot of savory goodness in this keto soup.

That said, you won't need a ton of out-of-the-ordinary ingredients to give this soup all that umami deliciousness.

All you need is a few simple low carb keto friendly ingredients like:

See, nothing too crazy.

The only unusual ingredient is porcini powder & that's optional.

Now, let's talk a bit more about mushrooms since they're are the star of this show...or should I say soup?

If you're new to the keto diet, you may be wondering, "Are mushrooms keto"? And the answer is, of course, yes!

Mushrooms are probably one of the best keto-friendly foods, to be honest. And there are three reasons I say that.

First, mushrooms are very low in carbs and calories. Every cup of mushrooms has just about 1.5 grams of net carbs and only 16 calories.

Second, mushrooms are a "bulk" vegetable (technically, they are not a vegetable, but a fungus), meaning that they can make you feel full. Mushrooms are jam-packed with fiber - and water - which will fill you up and curb your appetite.

Third, mushrooms are full of potassium. And eating foods high in electrolytes are a must if you're doing the keto diet since your body flushes out so much water - and this is especially true when you start the diet.

So, there you have it. There's a lot to love about mushrooms if you're doing a low carb diet like keto!

Mushrooms To Use For This Soup

So, as I mentioned above, I used sliced white button mushrooms for my keto cream of mushroom soup.

But, you can use a few other varieties of mushrooms and end up with results that are just as delicious as mine. That said, I recommend using either brown button mushrooms, cremini mushrooms, or even mini-portabellos as substitutes.

All of these options will add the flavor and richness you're looking for in a soup like this.

How to Make Keto Mushroom Soup

Ok, so, this keto mushroom soup is an effortless dish that takes little time to make.

Seriously, if you have a large pot, a stove, and some basic low carb ingredients, you can make this soup.

That said, let's get into the step-by-step instructions on how to make this keto cream of mushroom soup!

First things first, we're going to heat the butter in a saucepan over medium-high heat.

Then, when the pan is evenly heated, we can add the onion and rosemary to create a flavor base. Now, when those ingredients have been added, we'll let them simmer for 2 minutes - until the mushroom is slightly browned.

Next, we'll slice up the mushrooms into segments about 1" inch across. Then, we can add these mushrooms to the pan and saute until tender. And make sure that you do not cut the mushrooms too thinly for this part, or else they will lose their bulky texture when cooked.

Now, once the mushrooms are tender, we can add the chicken broth, seasonings (salt, pepper, etc.), and the porcini mushroom powder - if you chose to include it.

Adding porcini mushroom powder is optional, but it will increase the final dish's savory flavor and umami goodness.

Anyway, after adding the other ingredients to the saucepan, we can bring the mixture to a boil and then reduce it to a simmer. Then, when that's simmering, we can cover the saucepan with a lid and let cook for about 5 to 7 minutes - stirring occasionally.

Also, make sure not to boil the mushrooms for too long at this point, or else they will lose their firmness and become mushy.

Ok, so after letting the saucepan simmer, we'll add in the cream cheese and stir until it dissolves. Then when it does, give your concoction a taste and add any more seasoning if need be.

By the way, if you want your broth to be extra thick, add in a bit more cream cheese or another kind of soft cheese of your choosing.

And that's pretty much it!

All in all, making this keto cream of mushroom soup takes only about 10-15 minutes.

Serving and Storing This Keto Soup

So, this particular recipe makes about four servings.

And the best part about a recipe like this is how easy it is to store.

You can just put the whole pot of soup in the fridge, or you can pour the soup into Tupperware containers and portion it out for later. Either way, this keto mushroom soup will stay good for 4 to 5 days in the fridge or 3 months in the freezer.

That said, I think as far as keto soup recipes go, this creamy mushroom soup has got to be one of the best soups for meal prep. Literally, a simple 10-15 minute cook job can set you up with lunch for the rest of the week.

Nutritional Info On This Soup For Keto

Ok, so as I already mentioned, this recipe makes around 4 cups of soup.

And every cup of mushroom soup contains:

As you can see, those are some pretty ideal macronutrients for the keto diet.

There's twice as much fat in this soup as there is protein, and every cup of it has less than 5 net carbs as well!

Other Keto Soup Recipes To Try

Ok, so you made today's keto cream of mushroom soup - and you loved - but you're looking for some other keto soup recipes to try.

Well, luckily, I've got some other tasty soup recipes for keto up on the blog as well.

Some of my favorites are:

Anyway, I hope you enjoy this cream of mushroom soup!

If you try it, let me know how you like it in the comments. 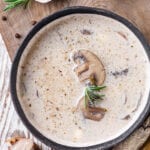 This Keto Cream Of Mushroom Soup Recipe is so rich and so creamy, and it's jam-packed with umami! Seriously, this hearty, earthy soup is one of the best creamy keto soup recipes you can make. Not to mention, you'll never believe every cup has just about 4 NET CARBS, and it takes only minutes to make!