Want to enjoy a pot roast but can’t figure out how to make the recipe work without a bunch of potatoes or other carbs? Well, this low carb keto pot roast recipe is perfect for you! It makes the best keto pot roast you’ve ever tasted, even without some of the staple ingredients you thought couldn’t be replaced.

Sometimes there's nothing better than a great pot roast.

Not only is it easy to set up and let cook throughout the day but it provides you with a filling meal after you get home from work.

But maybe the best part is the smell that permeates your entire kitchen and home.

Is there really anything better than smelling the mouthwatering scents of roasting meats and vegetables?

I definitely don’t think so!

So, let me show you how to make keto pot roast in a few easy steps!

First, and foremost, we have to talk about the ingredients!

The biggest difference between this keto pot roast and a "normal" roast is really the use of kohlrabi instead of potatoes.

If you've never heard of kohlrabi before, it has a mild - almost neutral flavor - and it has a "starchy" consistency to it as well.

That said, kohlrabi is totally low carb and keto-friendly! Every 100 grams of it has LESS THAN 3 NET CARBS.

However, if for whatever reason you can't find kohlrabi where you live, jicama, rutabaga, or turnips can work in its place. Although, those are higher carb options.

I just like to use it - kohlrabi that is - because it's the closest thing in taste and texture to potatoes.

Meats To Use In This Keto Pot Roast

Ok, let's take a quick second and talk about the main piece of this easy keto pot roast, the meat!

I like to use chuck roast when I make my pot roast, but there are a couple of other options you could use as well.

Other cuts of meats you can use are...

Now, regardless of which cut of meat you go with, you'll want to bring it up to room temperature, and season it with salt and pepper before browning it.

Bringing the beef up to temp will also give you plenty of time to prep the veggies for this keto pot roast, and add them to the crockpot.

So, to be as efficient as possible, make sure to prep them while the meat is warming up!

Anyways, once the beef is warmed up - and ready to be browned - you'll want to heat up a large pan over medium-high heat and add the oil.

Next, add your meat to the pan, and sear all sides of it - about a minute per side.

Once it’s appropriately seared, carefully place it in the middle of the slow cooker around the veggies.

At this point, you'll also want to add the bone broth, liquid aminos, and sprigs of rosemary.

By the way, it’s okay if some of the vegetables touch the meat – in fact, it’s preferred!

You want all the flavors to mingle together to make the perfect low carb pot roast dinner.

How To Make A Keto Pot Roast In The Crockpot

How To Tell When It’s Done?

Testing the slow cooker pot roast to see if it’s ready is pretty easy; stick a fork in it and twist!

If the meat is properly tender, you'll be able to easily twist off a forkful of meaty deliciousness.

Making A Keto Gravy From The Juices Left In The Crockpot

Also, when the meat is done, they'll be a ton of delicious juice left in the crock pot to make a gravy out of for you keto pot roast.

And making a keto gravy out of these juices is incredibly easy.

And that's how simple and easy it is to make a keto gravy out of the juices from this pot roast.

You can also make this pot roast in an Instant Pot!

Just set the Instant Pot to the sauté function and brown the beef as discussed before.

When the beef has been browned, add the onions, bulb of garlic, bone broth, liquid aminos and rosemary to the instant pot.

Don’t add the carrots, kohlrabi, or any other vegetables you might want to use in your pot roast just yet. We'll add them later so they don't get mushy.

Anyways, you'll want to seal the Instant Pot at this point and cook the pot roast on “high” for about 40 minutes.

Then once an hour goes by, let the cooker release its pressure over time, and add the rest of the vegetables - the carrots etc.

Now, once all the other veggies have been added, you'll want to cook the roast on "high" again.

However, this time you should only need to cook the pot roast on for another 10 minutes. Again, once it's done cooking, let the Instant Pots natural pressure release, and remove the roast and veggies from the pot.

So, now you'll be left with some wonderful juices in your Instant Pot that can be used as a gravy for the keto pot roast.

However, you'll want to remove any "solid" pieces left in the juices, and then thicken it up a bit before using it on the roast.

So, to do this, switch the Instant Pot back over to sauté, and bring the juices to a boil.

Also, adding just a tiny bit of xanthan gum - like a ¼ tsp - can really help you get the gravy thick. So consider adding a little of that if the gravy isn't thickening up as much as you'd like it to.

If you don't have an Instant Pot or a Crcokpot, you can also make this keto pot roast in a Dutch oven.

Best of all, making the pot roast in the Dutch oven is just as easy as making it the other two ways.

So, to make the roast this way, you'll want to brown the beef first.

By the way, you'll want to brown it in the Dutch oven itself.

So, to do this, add the macadamia nut oil to your Dutch Oven, and heat it over medium-high heat. Once the oil gets hot, add the roast, and sear every side of it until browned.

And, remember, the meat should be seasoned and brought to room temperature before being added to the pot. Again, this gives you time to prep all of the veggies for the pot roast. So, take advantage of this time to make the roast as fast as possible.

Anyways, once the roast has been browned remove it from the Dutch oven and set it aside. Then, add the broth and liquid aminos to the oven and deglaze the pan. Also, make sure to scrape down any of the browned bits stuck to the sides/bottom of the pan at this point as well.

Once the pot has been deglazed add the meat back to it, as well as the vegetables, garlic, and rosemary.

As I mentioned earlier, it should fall right apart when you stick a fork in the pot roast and twist. That's how you'll know it's done!

Which is enough for an entire dinner if you're a large family, or a week's worth of meal prep if it's just yourself!

Most importantly, this roast is great for those on the keto diet because it only has 4.5 net carbohydrates once all is said and done. And that's pretty low considering each serving is a big bowl of pot roast!

Plus, it leaves your kitchen smelling phenomenal for several hours after cooking is finished.

Whoever said that you can’t enjoy classic home-cooked recipes like this on the keto diet was wrong.

If you liked today's keto pot roast recipe, check out some of these other dinner recipes...

Keto Pot Roast Made In An Instant Pot, Crock Pot, Or Dutch Oven 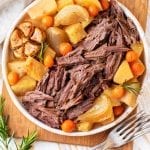 Want to enjoy a pot roast but can’t figure out how to make the recipe work without a bunch of potatoes or other carbs? Well, this low carb keto pot roast recipe is perfect for you! Plus, this roast can be made in your Instant Pot, Crock pot slow cooker, or even a dutch oven! That said, it truly makes THE BEST keto pot roast you’ve ever tasted...even without some of the staple ingredients you thought couldn’t be replaced.

1 garlic bulb the top cut off

⅛th to ¼ teaspoon of Xanthan Gum

No matter what cooking method you choose make sure to do these steps first...

Leftovers will keep well up to several days.