This keto almond cake is soft, moist, and sweet with just a touch of almond flavor. And, honestly, it's hard to believe just 4 ingredients can make such a divine cake. Plus, the best part is each slice of this keto french almond cake has less than 1g NET CARBS!

With so many cakes out there, I think almond cakes get totally overlooked. Not only are they one of the easiest cakes to make, but they are incredibly delicious.

And this keto almond cake recipe creates a low carb and sugar-free one that is an absolute treat.

It has such a moist, sweet crumb with just the right amount of almond flavor. And the sugar-free powdered "sugar" gives it an added touch of sweetness that balances out the naturally slightly bitter almond flavor perfectly.

Gah, this cake is good!

I guess you'll just have to make it and taste it for yourself to see how good I'm talking.

Alright, as I mentioned earlier, you'll only need 4 ingredients to make this cake.

And, the good news is that practically all of them are staple keto ingredients that I can almost guarantee you have already.

With that said, here's what you'll need for the cake:

And for the optional topping:

Now, the topping for this cake is optional, but I highly recommend you add it.

I mean, what would an almond cake be without some toasted almonds on top? And how can you not love powdered "sugar!"

Anyways, if you want another keto cake recipe that uses almost all of these ingredients, definitely try this keto angel food cake next!

Or, if you're feeling something chocolatey, this keto chocolate yogurt cake is great too.

KETO FLOURS TO USE & AVOID

Ok, so obviously the main ingredient to this cake is almond flour, and it adds a considerable amount of the almond flavor you'll taste in this cake.

But if you are allergic to almond flour or want other options, you can actually use walnut flour or sunflower seed flour, and this cake will turn out just as tasty. However, it will just take on a different flavor depending on the flour you use. Having said that, if you use one of these "alternative" flours, I'd recommend using 2 teaspoons of almond extract instead of the 1 ½ teaspoons listed.

By the way, a flour you DO NOT want to use for this cake is coconut flour. For one, it will make it taste like coconuts if you use it. And also, it is highly absorbent and will cause your cake to turn out dry and crumbly - if it even turns out at all which it probably won't.

So stick to almond, walnut, or sunflower seed flour to make this cake.

So obviously we won't be sweetening our almond cake with sugar as we would with a "typical" one.

Instead, we're going to give our cake its sweet flavor in a totally low carb - and keto friendly way - by using Confectioners Swerve.

However, a couple of other keto friendly sweeteners you could use are Lakanto's Powdered Monkfruit Sweetener or an allulose blend that's as sweet as sugar.

All of these options are sugar-free & calorie-free, and have the exact same sweetness as sugar, so they can be used interchangeably.

HOW TO MAKE KETO ALMOND CAKE

The process of making this cake is incredibly simple. And the entire thing takes about 35 minutes from start to finish!

So, if you need a quick cake to make before a party or get-together, this recipe is clutch.

The first thing you will do is preheat your oven to 350°F (180°C). Then line a 9" springform pan with parchment paper, coat it with baking spray, and set it aside.

Next, separate your egg yolks from the whites and put the yolks in one large bowl and the whites in another one.

Then add the Confectioners Swerve to the bowl of egg yolks - along with the extract - and beat with a hand mixer until creamy and thoroughly combined.

After that, add in your almond flour and mix gently - and quickly - until the flour is just combined. Make sure you DO NOT overmix, stop mixing right when the almond flour is incorporated.

Before moving on, clean your hand mixer attachments. If there's any yolk left on the mixing blades the whites won't stiffen properly.

And speaking of stiffening the whites, that's exactly what you'll want to do them next - beat them with the hand mixer until stiff peaks form.

Then, once that happens, spoon ¼ of the whipped up egg whites into your flour-yolk mixture at a time, and gently mix them into one another with a spoon.

Eventually, after enough spooning and mixing a cake batter will form. Then, when it does, you can pour it into the prepared 9" springform pan.

By the way, if you are using sliced almonds, you can evenly place them on top of the batter at this point.

Now that your almond cake is ready to go, bake it for around 20-25 minutes, or until a toothpick comes out clean from the center of the cake.

When your cake is done, take it out of the oven and let it cool in the pan until it reaches room temperature.

Then when it reaches room temperature, sift the Confectioners Swerve on top of the cake.

Cut your cake into 12 slices, serve, and enjoy!

This almond cake will be gone before you have time to get seconds if you're serving it at a get-together or party.

But if you are just making it for yourself or your family, hopefully, you'll have a few slices leftover.

If you do, either put your cake in an airtight container or cover it with plastic wrap, and it will last at room temperature for up to 1 week.

And to keep it even longer, you can store your almond cake leftovers in the freezer for up to 2 months. Then when the cake cravings hit, just thaw your cake slices on the kitchen counter overnight.

As you know by now, each slice of this low carb almond cake has less than 1 NET CARB.

And it is also pretty low in calories for a cake with just over 75 calories per slice!

Here are the rest of the macros for 1 slice:

This keto almond has such a light and fluffy texture with a touch of sweetness and subtle almond flavor. After you make it, I think you're going to find yourself whipping this up regularly.

I've served this cake at a bunch of get-togethers with family and friends, and everyone always loves it and has no clue it is a keto cake!

Anyways, I hope you like this keto almond cake recipe as much as I do. If you make it, let me know what you think in the comments below!

Almond flour is super versatile, and it is my favorite flour to use to get a spot on texture while keeping the recipe low carb.

And I have a ton of almond flour keto recipes that I think you'll like to try next: 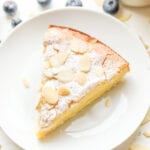 This keto almond cake is soft, moist, and sweet with just a touch of almond flavor. You won't believe just 4 ingredients can make such a divine cake. And the best part, each slice of this keto french almond cake has 1.5g NET CARBS!