This Keto Pumpkin Pie Recipe has everything you love about classic pumpkin pie, without all of the sugar or carbs that usually come with it. Not to mention, this keto pumpkin pie has a perfectly crisp crust and a rich, smooth filling that's so good it'll have you - and your guests - in disbelief that it's a low carb pie!

I don't know about you, but my Thanksgiving dinner isn't complete unless pumpkin pie is involved.

And this keto pumpkin pie recipe delivers all of the taste and texture you'd want/expect from a homemade pie - keto or otherwise.

In fact, this pie is so good that I can't even tell the difference between this keto friendly version and normal pumpkin pie.

Yeah, that's how good it is! The hype is real, my friends. No one can ever tell that the carb count is only 4 net carbs - just crazy.

Actually, I'll take it even one step further by saying that this pie is one of the best keto Thanksgiving dessert recipes you can make! It's right up there - maybe even ahead of - my keto pumpkin cheesecake recipe!

Anyway, if you're ready to make a fantastic sugar free, low carb keto pumpkin pie, then just whip out a few ingredients, and let's get started!

We'll be using some very standard keto friendly ingredients to make this low carb pumpkin pie. And, on the off chance, you don't have an ingredient at home already, I'll even give you some tips on substitutions you can make too.

That said, here's what you'll need for the keto pie crust:

And for the pumpkin pie spice filling:

Now, for the pumpkin pie spice filling, if you don't have coconut cream, you can substitute it with ½ cup heavy cream. With that said, the filling it is more "stable" with the coconut cream. This can also be substituted with the solid portion from refrigerated canned coconut milk.

Many baking recipes are converted between American and metric systems of measurement, meaning the exact measurements might not line up nicely. Although metric is the preferred system for baking, many people stick with what they know.

When baking, it's always good practice to use a kitchen scale to measure ingredients. This is especially important when measuring flour, as there's way too much variation in scooping techniques from inside of a bag or jar.

That being said, if you don't have a kitchen scale, you'll want to spoon flour into your measuring cup without packing it down.

And it's absolutely critical to this recipe that your flour weighs in at 40 grams, rather than the 45 grams that's typically found in a ⅓ cup.

So, to do your best job eyeballing it, spoon a tablespoon or so out of your ⅓ cup measurement, and you should be good-to-go!

This tip might seem obvious, but you want to make sure that you use pumpkin puree as the base of your keto pumpkin pie - and not a "pumpkin pie mix".

The pumpkin pie mixes are loaded with added sugar, and aren't keto friendly at all. So don't use them.

Pureed pumpkin on the other hand is made from pure pumpkin, and has no sugar added to it.

And that's exactly the kind that you'll want to use when you make this low carb pumpkin pie recipe.

Keto friendly flours to use for the crust

So, as you may have noticed, I used a combination of almond flour and coconut flour to make the keto pie crust.

Almond flour can be substituted with either walnut flour or sunflower seed flour on a one-to-one basis to make the pie crust.

That said, you can't substitute coconut flour for almond flour, and vice-versa.

Coconut flour is a VERY UNIQUE FLOUR that is highly absorbent, and almond flour is not.

So, you'll want to use the coconut flour as instructed above and not make any substitutions with it to make this pie crust.

Keto sweeteners to use for the crust & filling

I use Confectioners Swerve to sweeten up almost all of my keto dessert recipes.

But, you can use Lakanto's Monk Fruit in its place too. Just make sure it's not the one that's twice as sweet as sugar because that variety will be far too sweet for this keto pumpkin pie recipe.

That said, I never recommend using stevia as a substitute. Most stevia products are mixed with sugar to make them palatable since stevia is 300 times sweeter than sugar in its raw form.

So, keep that in mind.

How To Make Keto Pumpkin Pie

Ok, now that we've talked about the ingredients, let's talk about how to make this keto pumpkin pie.

And making a keto pumpkin pie might sound like a challenge at first, but it's super easy!

All this recipe takes is six simple steps – and I break it all down for you in the recipe instructions below.

If you have a baking thermometer, this is a great time to pull it out and make sure your oven is operating at its expected temperature. If not, just keep an eye on the crust while your pie is cooking.

You'll also want to make sure your oven rack is in the middle location of your oven.

If it's set too high, your crust will brown too quickly, and if it's too low, your pie will burn at the bottom.

In a large bowl, mix the almond flour, coconut flour, and the Confectioners Swerve with salt.

When your ingredients are thoroughly mixed, add the whisked egg and melted butter with a wooden spoon until the lumps disappear.

Then, hand mix until your ingredients resembles a dough.

Knead the dough into a ball and let the ball sit for five minutes to rest. This is an important step to make sure the dough filaments can relax into their non-stretched positions.

If you over-knead, your dough will become hard to shape and stretch into a pie shape.

After you let your dough sit, press the dough into a nine-inch pie pan that has been coated with baking spray.

Now, if you're making decorations for the top of the pie, put a handful of dough aside and refrigerate until you're ready to shape it later in the process.

So, now it's time to par-bake the pie crust! And doing this is crucial since it'll ensure you end up with an even finish of the underside of the pie.

To accomplish this, line the dough with parchment paper and fill the pie pan with dry beans or pie weights. Then, bake your keto pie crust for around 8-10 minutes.

This step allows the oven heat to envelop the pie crust and cook it evenly.

Essentially, the bottom portion of your pie will get a head start on the cooking process.

Next, reduce the oven temperature to 325°F (163°C) to get ready for the final baking step.

Remove the crust from the oven and cool the almond flour crust on the counter for 10 minutes on a baking rack or cookie rack. (If you set it on a flat surface, the pie will not aerate properly and might overcook at the bottom.

Step 5: Make the filling, add to pie, and bake

While your pie crust is cooling, whisk together all of the ingredients for the pumpkin pie filling until smooth.

After your ingredients are mixed, simply pour the pumpkin pie filling into the almond flour crust.

Then, gently tap the filled pie on the counter to release air bubbles.

Now you'll want to bake the filled pie for around 40 minutes.

So, once that amount of time passes, your keto pumpkin pie will be slightly jiggly in the center. And this is the perfect time to pull the pumpkin spice pie from the oven.

The heat from the inside of the filling will continue cooking it even after it's out.

That said, if you're making decorations for your pie, shape them and bake them separately for about 15 minutes.

Finally, cool your pie completely on the counter, add the decorations, and refrigerate at least an hour - preferably more - before slicing your tasty pie.

Then slice up one of the best pumpkin pies, serve with whipped cream on top, and enjoy!

How To Store Keto Pumpkin pie

Ok, so you've made this keto pumpkin pie, you ate it, you loved it, and now you have some leftovers.

If that's the case, you can store this keto pumpkin pie for up to 4 days in the fridge or up to 2 months in the freezer.

And, as far as how to store the pie, just cover & seal the dish you baked it in with foil, or add the slices to an air-tight container.

That is how to make the best keto pumpkin pie! The smooth and creamy pumpkin pie filling on top of the tender, buttery almond flour pie crust is just too good to be true.

Seriously, my family and friends absolutely love this keto twist on pumpkin pie, and I love that it's so low carb. They can never even tell that it's not a traditional pumpkin pie!

And, if you've been worried that baking a low carb keto dessert for the holiday season might be too difficult - or time consuming - then hopefully, this recipe changes your mind.

That said, if you try it, let me know what you think in the comments!

If thought this was the best pumpkin pie and want to give some more delicious fall recipes a try, I have a ton on the blog that you have to make!

Check out all of these recipes: 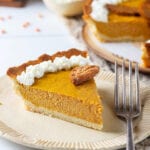 This Keto Pumpkin Pie Recipe has everything you love about classic pumpkin pie, without all of the sugar or carbs that usually come with it. Not to mention, this keto pumpkin pie has a perfectly crisp crust and a rich, smooth filling that's so good it'll have you - and your guests - in disbelief that it's a low carb pie!

*For the coconut cream, you can substitute it out with the "solids" found in a can coconut milk when it's chilled in the fridge, or ½ a cup of heavy cream.

It is more stable with the coconut cream though.

***NOTE: If you scale up the measurements in the recipe cards the grams do not scale up as well. You'll have to do this manually.