These Keto Stuffed Peppers are one of the best summer-time keto meals you can make! I mean, what's better than bell peppers stuffed with seasoned ground beef, cauliflower rice, and cheddar cheese?! Plus, from start-to-finish, these stuffed keto bell peppers take just 45 minutes to make too.

If you're on a low-carb diet and miss the abundance of flavor that you used to enjoy before you worried about what you ate, you're probably scouring the internet for keto-friendly recipes to quench that hunger.

Well, this keto stuffed pepper recipe will allow you to create incredible-tasting stuffed bell peppers without taking in too many carbs and blowing up that diet you've been working so hard on.

By using cauliflower rice as one of the main staples of the stuffing, you'll be able to enjoy a low carb alternative to regular rice, and your peppers will still taste great. They just won't have all the unnecessary carbs.

These peppers are the perfect dish to act as the main course for a family dinner or as an appetizer for something a bit larger.

No matter what your reasoning for making these peppers, we are confident that you'll make them again and again after you try them!

Read on to learn how to make keto stuffed peppers that taste so good everyone you share them with will ask for the recipe!

Here's what you'll need to make your stuffed peppers keto...

Making these amazing stuffed peppers is easier than you think, and you don't need many tools for the job.

All you'll need for this recipe is a medium-sized pan to make the stuffing in, and a baking pan - or baking sheet - to cook the peppers on once everything is ready to go.

It's such a simple & easy keto recipe.

And you shouldn't have to spend more than 15 minutes prepping the peppers, and 30-35 minutes cooking them in the oven.

Keto dinner done in less than an hour?

In a medium-sized pan, heat the macadamia nut oil or avocado oil on medium heat.

Once the oil is heated, add in the ground beef.

Let the beef cook for a few minutes until it's browned. Having said that, make sure to stir the beef as it cooks, so it browns evenly.

You don't need to be worried about cooking the meat all the way through at this point, just enough for it to all be browned. Overcooking the meat will lead to lower-quality stuffing.

Once the meat browns, add in the tomato sauce, salt, pepper, thyme (chopped or dried), paprika, and garlic powder.

Continue cooking this mixture on medium heat and stir it occasionally to ensure everything is evenly mixed.

Now, when everything has combined nicely, mix in the cauliflower rice.

Once the cauliflower rice has been incorporated well, let the stuffing simmer and stay warm with the burner off while you prepare the peppers.

Making and Baking the Stuffed Peppers

Cut the tops off all of the bell peppers to create cups or half them length-wise, depending on how you want to serve them.

That said, whichever way you cut them, be sure to clean the inside of the peppers to remove the seeds.

Nobody wants to eat a stuffed pepper full of seeds, am I right?!

Next, arrange the cut and seeded peppers even spaced apart on a baking pan. Then, using the mixture you've already prepared, evenly distribute it among the peppers and stuff them with the filling.

Now, once you've added all of the stuffing, top off the peppers with shredded cheddar cheese to finish them off.

At this point, you'll want to pour ½ a-cup of water into the bottom of the pan to help cook the peppers properly.

After you've added the water, heat the oven to 350℉ and cook the peppers uncovered for 30-35 minutes - until the peppers are tender.

Then, after they're finished cooking, remove the peppers from the oven and let them cool before serving.

Serve the peppers with sour cream and enjoy.

And that's how to make stuffed peppers keto!

It's literally that easy.

And the recipe is so good your friends and family will be beginning you to make these low carb stuffed bell peppers again and again!

And here's how the nutritional info breaks down on each one...

I mean, for keto dinner recipes I like to keep the carbs to around 5g net carbs per serving.

And these keto stuffed peppers are right in that ballpark!

Plus, you can always cut them in half and trim the carb count down on them even further. You'll even build a little extra portion control into the recipe if you do that too.

And you know I'm a fan of that!

Ok, so if you're making these peppers for yourself, the chances are high that you won't go through all six in one sitting — but we wouldn't blame you if you did since they're that tasty!

With stuffed peppers, you can store them in a covered container in the refrigerator for a couple of days and eat them later if you have leftovers with no problem.

After a few days, though, they will start to get soggy and go bad, so you don't want to store them for too long.

You can always cut the recipe in half if needed and make fewer peppers so that you and your family can enjoy them fresh every time.

We hope that you'll give it a shot, let us know what you think about this great-tasting keto-friendly stuffed peppers recipe!

It's one of our favorites, and we hope you like it just as much!

Of course, these keto stuffed peppers are just one of MANY keto dinner recipes on the blog.

That said, if you're looking for some other low carb dinner ideas check these recipes out... 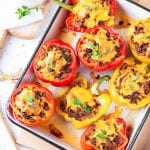 My family LOVES these Keto Stuffed Peppers! Honestly, they think they're one of the best summer-time keto meals I make. And what's better than bell peppers stuffed with seasoned ground beef, cauliflower rice, and cheddar cheese?! Nothing! Plus, from start-to-finish, these stuffed keto bell peppers take just 45 minutes to make too.

Shredding the cheddar cheese yourself will save you some carbs!