This keto stuffing is just what you need to complete your Thanksgiving dinner. It is a classic stuffing recipe made with some keto bread, and it only has 3 NET  CARBS per serving!

Keto Thanksgiving recipes don't get any better than this low carb stuffing. And I don't know about you, but stuffing is one of my favorite parts of a Thanksgiving meal.

With that said, typically stuffing is made with white/wheat bread, loaded with carbs, and is not even close to keto friendly. So, if a family member is in charge of making it, odds are you'll have to pass.

But, you can't skip out on stuffing just because you're on a keto diet! Let's be real, if you don't have it at the table, was it really Thanksgiving?

Well, this keto stuffing tastes so much like the "real thing" that even non-keto people think it is one the best stuffings they've ever had!

And even though it tastes like traditional stuffing, there are only 3 NET CARBS per serving! Plus, this is not just a low carb stuffing recipe it's gluten free stuffing too. And, best of all, you only need a couple of wholesome ingredients to make it.

Plus, it takes under 30 minutes to make from start to finish!

So you'll have plenty of time to make these keto mashed potatoes, this keto gravy, and this keto pumpkin pie for dessert to complete your keto Thanksgiving.

As I mentioned, you'll only need a couple of simple ingredients for this keto sausage stuffing recipe. And some of them are pantry staples that you probably have at home already!

Not bad for a low carb stuffing recipe, right?

And if you're looking for store bought keto bread to use, check out this list of the best low carb bread that you can buy at the grocery store, or make my homemade keto bread loaf ahead of time or any almond flour bread.

HOW TO MAKE KETO STUFFING

But, even if you haven't, it is super simple and really just takes some chopping and baking.

Now, gather your ingredients and anyone who wants to help cook, and let's make some stuffing keto friendly!

Then slice or break the loaf of bread into any sized pieces you want, coat a pan with butter, and toast the slices of pre made keto bread in it. Once toasted, put the bread in the casserole dish that you will use for the stuffing, and set it aside.

Next, add the sausage to the same pan you just toasted the bread in, fry it for a couple of minutes on each side, and put it in a bowl set aside for later.

Then, add a little olive oil to the same pan and saute the onion until it softens slightly. After that, add the garlic and chopped celery and saute those together for a few minutes.

Follow that by adding the sliced mushrooms to the pan, and continue sautéing for a few minutes.

STEP 2: PREPARING THE OTHER INGREDIENTS

Now blanch the cauliflower for a few minutes and then set it aside.

Next, melt the chicken bouillon cube in the boiling water from the cauliflower and when it cools down a bit, add one beaten egg to it.

Then, add the cooked sausage, onion, celery, mushrooms, and blanched cauliflower to the prepared baking dish with the toasted bread.

Now pour the chicken broth and egg mixture into the casserole dish. Then, add the salt, pepper, and finely chopped fresh rosemary, and give everything a good stir until all the ingredients are well combined.

Once your keto stuffing is baked, serve it at your Thanksgiving table and enjoy!

HOW TO STORE KETO STUFFING

This keto stuffing recipe will about 6 servings - depending on how much everyone takes - so it should be plenty for your keto Thanksgiving dinner!

But if you have a big family and know you'll need more, just double the recipe and split it up into two casserole dishes!

It's hard to believe that there will be any leftover, but if you do have some, this stuffing stores really well. So you can enjoy a second or third Thanksgiving meal the next few days!

Either cover your casserole dish with a lid or transfer the stuffing to an airtight container. Then it will last for up to 4 days in the fridge!

And you can reheat the stuffing by putting it back in the oven at 350°F until it reaches your desired temperature.

Keto Thanksgiving just got a whole lot better this year thanks to this keto stuffing recipe.

It will allow you to enjoy a classic Thanksgiving meal while keeping it low carb and keto friendly! But don't just make this recipe once - it's great all year long for various occasions or just a weeknight dinner.

Anyway, I hope you enjoy this keto stuffing as much as my family and I do!

If you make it, leave a comment below and let me know how it turned out. And have a happy keto Thanksgiving!

If you're looking for more keto recipes that you can make, I have a few for dinner and dessert that I think you'll like!

Check all of them out:

Keto Stuffing | One Of The Best Keto Thanksgiving Recipes 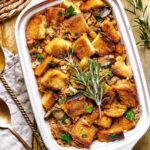 This keto stuffing is just what you need to complete your Thanksgiving dinner. It is a classic stuffing recipe made with some keto bread, and it only has 3 net carbs per serving!