These Apple Cider Keto Donuts taste just like the "real" thing. They're kind of cakey and kind of crumbly, but they're totally delicious! And the best thing about these keto donuts is that each one has LESS THAN 2 NET CARBS!

Certain flavors go hand and hand with the arrival of fall. And one of them is apple cider.

In Buffalo, apple cider donuts can be found at just about every apple orchard you'll visit. Of course, the ones you'll find at these orchards are by no means low carb keto friendly donuts.

But, that's ok, because making them at home is incredibly easy to do. And, I don't mean to brag, but I have THE BEST recipe for apple cider keto donuts. Like, when you make these low carb donuts, you're going to freak out.

And, I guarantee you, nobody in your house is going to believe you when you tell them these are keto donuts.

Mmhmm, that's right. You can stay on track with your low carb eating habits while making a treat your household loves too!

By the way, these keto donuts are super quick to make. All it takes is about 25 minutes from start-to-finish to whip these up.

And, if you already make keto friendly food at your house, you may have most of the ingredients you need for them already in your cupboard. The others you should be able to find locally or buy them online.

And the answer is typically they are not keto friendly. If you eat them in very, VERY, small quantities, you can stay in ketosis afterward. However, eating an entire apple on the keto diet is pretty much a no-go.

Honestly, using the extract instead of real apples is the secret to making these keto donuts so low carb. In fact, it is the main reason we can keep each one of these apple cider donuts below 2 net carbs.

Ok, so now that we've got that apple info covered, let's take a look at all of the ingredients you'll need to make these low carb donuts.

Those are some pretty standard keto ingredients, eh?

I mean, the only thing out of the ordinary is apple flavoring, and that's easy enough to find in your local grocery store or online.

By the way, if you have some dry ingredients left over, you can use almost all of them to make my 5 minute low carb pumpkin pie next.

Keto friendly flours to use for these donuts

As I mentioned above, you can make these donuts with either almond, walnut, or sunflower seed flour, depending on your preference.

However, it's worth mentioning that coconut flour is NOT A SUITABLE SUBSTITUTE and SHOULD NOT BE USED to make these donuts.

Coconut flour is HIGHLY ABSORBANT, whereas the flours I recommend using are not. So, if you try to use coconut flour, you'll end up with a dry, crumbly mess, and not delicious donuts.

So, make sure to keep that in mind when you're making this keto donut recipe.

Sugar Substitutes To Use For These Keto Donuts

Ok, now let's dive a little deeper into the best sugar substitutes to use for these donuts.

I used a combination of Confectioners & Granulated Swerve to make my donuts.

The main thing to avoid is Stevia. Stevia - in it's purest form - is 300 times sweeter than sugar and is way too sweet to use.

Then, in a large mixing bowl, we'll add the blanched almond flour along with the Swerve, baking soda, cinnamon, allspice, and nutmeg, and salt.

After we've added those ingredients to the bowl, we can mix them until they are thoroughly blended.

Now, in another mixing bowl, we're going to combine 2 eggs and whisk them until the yolks combine with the whites. We'll then add the unsweetened almond milk, apple flavoring, and melted butter to the beaten-up eggs.

Ok, now we're all ready to whisk all of our wet ingredients together.

Then, we can slowly pour the wet ingredients into the mixing bowl with the dry ingredients. Now we can use a spatula to mix them until thoroughly blended.

And, just so you know, the batter will be thick when completely mixed.

Now we're all set to get that donut batter in a pan and bake our keto donuts!

Choose The Right The Donut Tray

So, as I'm sure you know, you'll need a donut tray to bake these apple cider keto donuts.

That said, not all donut trays are created equal.

I highly, HIGHLY, recommend using a silicon tray because the donuts come out of them incredibly easily. They are also easy to clean too.

Trust me; the same cannot be said for non-stick pans.

So, keep that in mind if you don't own a donut tray yet, and you need to get one.

Ok, so now that you know the best kind of donut tray to use, let's talk about baking these keto donuts.

The first thing you'll want to do is coat the tray with baking spray.

Then, use a spoon to fill each of the slots in the donut tray about ¾ of the way full.

The batter should be evenly distributed around the circle. For uniformity, try to distribute equal amounts of the batter among each of the slots on the donut tray.

Also, don't worry if you screw that second part up; you can always rebalance the donut batter when you've added all of it to your tray.

And if this is your first time making them check them at 10 minutes. Oven temperatures and cooking may vary; you don't want them overdone.

Now, when they are ready to be removed from the oven, they will be golden brown on top. And they will also be solid around the edges, pulling away from the circles on the donut tray.

Just note the overall cooking time for your oven after the first batch. Then you will know how long to bake future batches!

Finally, allow them to cool completely before trying to remove them from the donut pan.

That said, while they're cooling, make the topping for them.

Alright, now, in a mixing bowl, you can add the topping ingredients - the Granulated Swerve, cinnamon, allspice, and nutmeg. And be sure to mix it well with a spoon.

Now, take a cooled donut and lightly spray the top of it with cooking spray.

Then, immediately place the sprayed side into the topping mix.

Do the same process for the other side of the donut. And, for the best results, repeat the spray and cover process a couple of times per donut. Double - or triple - coating the donut with baking spray ensures each donut ends up with a generous amount of topping.

And there you have it, perfectly cakey/crumbly apple cider keto donuts!

By the way, I highly encourage you to share these donuts with friends and family. They'll certainly thank you for it!

They're perfect for fall parties or sharing at work too. And don't be surprised if others ask you to share the recipe with them - I know my friends and family already have!

Ok, so, you've cooked the donuts, you've eaten them, you've loved them, and now you've got a few leftovers to save for later.

If that sounds like you, then you'll want to store them in a sealable bag - or container - to keep them as fresh as possible. And, as far as where to store the donuts, I just keep mine out on my kitchen counter. You can refrigerate them, but you don't have to.

That said, if you store these low carb donuts as I described above, you can expect them to stay good for up to a week.

And, honestly, I think they're just as good - if not better - the day/s after you make them!

Nutritional Info On These Keto Donuts

As far as the nutritional info goes on these, every donut has:

Not too shabby, eh?!

See, enjoying flavors of fall is possible while staying low carb and keto friendly. And these apple cider donuts are both!

Trust me; once you try this healthy homemade donut recipe, you'll make them often!

And, if you do try them, let me know what you think in the comments below.

Other Fall Keto Recipes To Try

So, check those out if you're trying to get seasonal with your keto recipes! 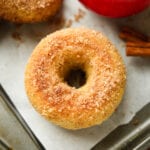 These Apple Cider Keto Donuts taste just like the "real" thing. They're kind of cakey and kind of crumbly, but they're totally delicious! And the best thing about these keto donuts is that each one has LESS THAN 2 NET CARBS!