This Keto Chicken Pot Pie Recipe is one of the best low carb chicken recipes you can make. It has the perfect balance of chicken, veggies, and savory-chewy-crust in every bite. And each serving of this keto chicken pot pie has just 3.5g net carbs.

If you're on a low-carb diet, you probably think that anything that is composed of crust or dough is out of the scope of what you should be eating.

And for the most part, you'd be right!

That said, one of the main things we'll obviously need to address in today's recipe is just that - the crust!

And we'll certainly do that in today's Keto Chicken Pot Pie Recipe. It's actually easier than you think to make a delicious low carb keto pot pie crust.

By switching out common ingredients for making dough - such as wheat flour - with low carb flours, including almond and coconut, you can cut down on the number of carbs massively.

And by doing this - along with just a few other simple things - you'll end up with a perfectly chewy keto chicken pot pie crust that tastes just as good as the "real" thing!

It's sure to be a recipe that everyone will enjoy!

Alright, so, there are a couple of components to making chicken pot pie - the filling and the crust!

Here's what you'll need to make both...

As you can tell, it takes more than just a few ingredients to make a fantastic keto chicken pot pie - but it's worth it.

By the way, if you have some chicken leftover after making this recipe, give this air fryer chicken breast recipe, or this keto cobb salad recipe a shot next!

You'll notice that I like to use macadamia nut oil or avocado oil for sauteeing in a lot of my recipes. And the reason I like to use those oils is for two purposes: their high smoke point and great flavors.

Honestly, they are some of the best pan-frying oils you can use.

However, if you'd like to use olive oil in place of them, you can.

A lot of people make the mistake of thinking you can substitute one for the other, but you can't.

Coconut flour is FAR MORE ABSORBENT than almond flour is. It sucks up liquid like a sponge.

So, if you try to replace the almond flour with more coconut flour, your crust will turn out dry...if it even turns out at all.

That said, if you'd like to substitute the almond flour with something else, use either sunflower seed flour or walnut flour.

These flours are both keto-friendly, and can be substituted with almond flour on a 1:1 basis.

This is just a small detail, but it will save you a few carbs.

Shred the cheese yourself.

Almost all prepackaged shredded cheddar cheeses have potato starch - or the like - added to them to keep them "fresh." And these added ingredients have carbs.

However, if you shred the cheddar cheese yourself, you won't add any additional carbs to the recipe.

So, just keep this in mind.

Making this low carb chicken pot pie is relatively simple and should only take you about 20 minutes of preparation, followed by 40 minutes in the oven.

And for the best results, I recommend using a food processor to help make the dough...but kneading it with your hands works too!

Other than that, you don't need any special tools for this recipe other than a medium-sized pan and a warm oven.

It's basically as easy as making this a keto casserole - like this cheeseburger one, or this keto taco one.

Ok, so you'll want to start by getting the vegetables ready for the filling.

To do this, take the mushrooms, onion, carrot, bell pepper, green beans, and celery and dice them all up into cubes that are about a quarter of an inch in size.

Once all the vegetables are diced up, add the macadamia nut oil or avocado oil to a medium-sized pan and heat the oil on medium heat.

Then, once the oil is heated, add in all of the diced vegetables.

After the vegetables have been added, season them with half a teaspoon of oregano and a bit of salt and pepper.

Now cook the seasoned vegetable mixture in the heated oil for 5-6 minutes. And you'll want to make sure you stir the veggies gently while they're cooking.

Having said that, you'll want to cook the onions until they become soft and translucent and the mushrooms become tender and brown.

Once the onions and mushrooms have reached these points, add in the cream cheese and the cubed chicken. Stir this mixture together until the vegetables, cream cheese, and chicken are thoroughly combined.

Now transfer the filling into a 9-inch circular baking pan and spread it over the pan to ensure it will all cook thoroughly.

Ok, so now let's focus on making the crust for our keto pot pie!

Put this mixture into a food processor and use the "pulse" setting. Do this until the butter is about the size of peas.

If you don't have a food processor, mix it with your hands or kitchen utensils. If using your hands, make sure you move quickly, so the butter doesn't melt due to the heat of your hands.

When that's taken care of, add in the large egg and grated cheese. Now pulse the mixture a few more times if you're using a food processor.

If using your hands, knead the mixture together — again, remember to work quickly to prevent the butter from melting.

Now at this point, you'll want to roll this finished dough mixture between two parchment sheets into a 10" circle.

Then, when the dough has been rolled out adequately, place this dough over the filling we made earlier, and tuck the edges into the dish.

Now make a few cuts in the center of the dough to allow heat and air to escape while it cooks.

Once your freshly made crust is covering the filling in the dish, you're nearly finished!

At this point, you can brush the top of the pot pie with heavy cream or egg whites and finish it off with sesame seeds if you so choose to.

Once it's ready, bake the pot pie in the oven for 40 minutes at 375℉ - or until the crust is golden brown.

After it's done baking, remove from the oven and let it cool for 5-10 minutes before serving.

You're all finished, all that's left now is to enjoy this incredible keto-friendly chicken pot pie!

Alright, so this Keto Chicken Pot Pie makes 8 servings, and each serving has...

Yeah, you read that right. This chicken pot pie has just 3.25g net carbs per serving.

As far as keto dinner recipes go, it's going to be next to impossible to beat that.

Not to mention, this isn't just any keto dinner recipe, this is a chicken pot pie recipe!

I know it seems too good to be true.

Ok, so, you've made the chicken pot pie, you loved it, and now you're wondering how to store it.

Well, if you wrap it tightly with aluminum foil - or plastic wrap - it can stay good for up to 5 days in the fridge.

Having said that, if you want to store this keto chicken pot pie for longer than that, I recommend freezing it. If it's stored properly it can last up to 6 months in the freezer.

So, feel free to make 2,3, or 4 at time! This way, if you need a quick and easy keto dinner, but you don't have time to make anything, you'll have this pot pie ready to go!

Anyways, that's everything you need to know about making chicken pot pie keto!

Let me know what you think about it in the comments below if you do!

It's without a doubt one of my favorites and I hope you like it just as much as I do! 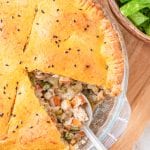 This Keto Chicken Pot Pie Recipe is one of the best low carb chicken recipes you can make. It has the perfect balance of chicken, veggies, and savory-chewy-crust in every bite. And each serving of this keto chicken pot pie has just 3.5g net carbs.