These keto raspberry cheesecake bars are little layered bites of heaven. From the fresh raspberry topping to the buttery crust, they have so much more to them than just regular plain keto cheesecake bars. And the best part, each one only has 3.5 NET CARBS!

Keto cheesecake is one of my all-time favorite things to eat for dessert - especially this one. So I decided to reinvent a classic cheesecake in the form of these low carb raspberry cheesecake bars.

And let me tell ya, they are better than I ever thought possible.

These bars have a few layers of deliciousness to them. On the bottom is a crisp, buttery crust. Then a smooth cheesecake layer, covered with a fresh and sweet raspberry sauce. And to finish it off, a crumbly, nutty melt in your mouth topping.

Honestly, the different elements of this recipe have to be one of the best combos I've ever had in a keto dessert.

And they are all super easy to put together and are made with classic keto-friendly ingredients.

Besides how delicious these bars are, my favorite part about this recipe has to be that it allows you to enjoy fresh raspberries while still keeping it low carb.

I mean, each one only has 3.5g NET CARBS, and they make an amazing summertime dessert. It doesn't get much better than that, does it?

So, as I just mentioned, you will need all common ingredients to make each component of this recipe.

And don't be intimidated by the length of the ingredients list - you will be using a few of the same ingredients for multiple layers.

Check out what you'll need for the crust:

For the cheesecake layer:

And for the raspberry sauce layer:

Last but not least, the nut crumble topping:

See, all super common keto ingredients. I honestly wouldn't be surprised if you have everything you need at home already.

Keto Flours To Use And Avoid

As you may have noticed, we will be using almond flour to make the crust and nut crumble topping.

But if you are allergic to almond flour or want some other substitutes, you can use an equal amount of walnut flour or sunflower seed flour in its place. Either will work just as well for both the crust and nut crumble.

With that said, a flour you DO NOT want to use in place of almond flour is coconut flour. Since it is an absorbent flour, it will cause your crust to be too crumbly and will dry out the nut crumble.

So for the best results, use either almond, walnut, or sunflower seed flour.

KETO SWEETENERS TO USE

We will be adding a touch of sweetness to every part of these cheesecake bars while keeping them sugar-free and low carb.

And to do that, I used Confectioners Swerve. It is a 0 calorie, sugar-free sweetener that is just as sweet as sugar.

That said, if you want a substitute, you can also use Lakanto's Powdered Sweetener - it is essentially the same thing as Swerve and will work just as well in this recipe.

Allulose will also work well in this recipe. You may just need a bit more of it since it's usually not as sweet as Swerve/Lakanto.

HOW TO MAKE KETO CHEESECAKE BARS

There are a few different parts to this recipe to make each layer, but each is a breeze.

You're going to love the simplicity of this recipe, and I have a feeling you'll love the result even more.

So let's not waste any more time and make some raspberry keto cheesecake bars!

The first thing you will do is prepare the raspberry sauce. Put a saucepan on your stovetop over low heat and add in your raspberries and confectioners swerve.

Cook the mixture, constantly stirring until the berries dissolve. Then when they do, cook for 3 more minutes until the sauce thickens a little.

Once it thickens, set it aside to let it cool.

Then add your melted butter, almond flour, and confectioners swerve to a small bowl, and mix until combined.

Next, put the mixture in your pan, and press it to take the form of the pan.

Bake your crust for 8-10 minutes until the edges just turn brown. Then remove your crust and let it cool.

While your crust is cooling, take out a large mixing bowl and add in your cream cheese, egg yolk, confectioners swerve, and vanilla extract.

Then using a hand mixer, mix these ingredients until combined and smooth.

Now it's time to bring everything together!

First, spread the cheesecake mixture evenly over your cooled crust. Then add the raspberry sauce on top of that.

Next, combine your butter, almond flour, nuts, and confectioners swerve in a food processer, and pulse until it resembles a crumb-like mixture. And, if you'd like a little toasty-ness to it, toast for a few minutes in a pan until fragrant.

Now, to finish up, add the nut crumble to the top of your bars and then refrigerate for at least an hour.

Finally, take your bars out of the fridge, cut them into 9 squares, and enjoy!

So, you made your cheesecake bars, everyone who tried them loved them, and now you have a few leftovers.

If this sounds like you, first, you're lucky all of them aren't gone! Second, these bars are such a treat to have on hand for an after-dinner dessert.

To store your leftovers, either tightly wrap your pan in plastic wrap, or transfer your bars to an airtight container. They will last in the refrigerator for up to a week.

And if you want to hang on to them for even longer, you can store them in the freezer for a few months in an airtight container or freezer-safe bag.

Then just transfer your frozen cheesecake bars to the fridge the night before you plan on enjoying them!

As you know by now, each bar has only 3.5 NET CARBS! And the rest of the macros are great for the keto diet too.

Check out the nutritional info for 1 bar:

These indulgent keto raspberry cheesecake bars are sure to become one of your favorite desserts. The fresh fruit, smooth filling, and crust-crumble topping encasing them are just so good together.

And there's just something about eating cheesecake in the form of a bar that is so much more satisfying than having a slice.

Well, I hope you enjoy this keto cheesecake bars recipe as much as I do. Also, make sure to treat your friends and family to some of this yumminess -they are sure to love it!

And if you make this recipe, leave a comment below, I'd love to know what you think.

If you like desserts that you can just pick up and eat, I have a few on the blog that I think you'll really like.

Try making one of these next: 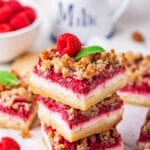 These keto raspberry cheesecake bars are little layered bites of heaven. From the fresh raspberry topping to the buttery crust, they have so much more to them than just regular plain keto cheesecake bars. And the best part, each one only has 3.5 NET CARBS!