This keto brownies recipe makes incredibly rich, decadent, and fudgy keto brownies. You won't believe that each one has just 1.5 NET CARBS! And all you need to make them is coconut flour and just a few other simple keto ingredients to make this easy keto brownie recipe.

If you're looking for a SUPER FUDGY Keto Brownies, you've found them!

Honestly, these are the best keto brownies I've ever made.

So, as I'm sure you could tell in the video, these brownies are very easy to make.

You're pretty much just adding all of your ingredients into your food processor, combining them together, and baking!

How easy is that?!

That's almost like making brownies out of a box easy.

I'm guessing a lot of you - if not all of you - have these ingredients in your kitchen already.

Especially if you've been doing the keto diet for a while. All of them are staple keto ingredients, and I personally use them in a lot of my recipes.

So if you don't have one or two of them, this recipe is a good excuse to stock your house! Especially since you can make this super tasty keto brookie recipe out of them as well!

As I mentioned, I used Confectioners Swerve to sweeten up these keto brownies, and it's what I recommend using.

The only other powdered erythritol sweetener I recommend is Lakanto's Powdered Monk Fruit Sweetener. You can substitute monk fruit 1:1 with Swerve which is great!

That said, do not use Stevia. It's FAR sweeter than Swerve.

Coconut flour is probably the trickiest flour to work with when it comes to low carb keto recipes.

So, I don't recommend trying to substitute it with any other flours to make these fudgy brownies.

The reason for this is that coconut flour is SO ABSORBENT. Like, way more absorbent than ANY other kind of flour.

That said, I've made A LOT of brownie recipes without it, like this keto brownie batter and these low calorie brownies.

How To Make The Best Fudgy Keto Brownies

As always, for best brownie results, I recommend weighing out all of the ingredients on a food scale to the gram.

Ok, PSA is over....let's get to the instructions!

The first thing you'll want to do is pre-heat your oven to 350 degrees Fahrenheit (177 degrees Celsius).

Now, cut up the butter into smaller pieces and add them to a medium-sized bowl.

Next, add the semi-sweetened keto chocolate chips to the butter, and melt them together in the microwave. Now, stir those together, add the almond milk, and stir again.

Once a chocolate sauce forms in the bowl, add the eggs and stir again until combined.

Now, transfer that mixture to your food processor, and get out the dry ingredients.

At this point, you'll want to cover an 8x8 baking dish with parchments paper, coat it with baking spray, and add the brownie batter to the dish.

Bake the brownies for around 30-35 minutes. Or, until you can insert a toothpick into them and it comes out dry.

Once you can do that, remove the brownies from the oven, and let them cool down. This is MASSIVELY important so make sure you do it!

The brownies will be soft, almost "fluffy" when they come out of the oven, but as they cool they'll set and firm up. I like to let them cool for at least 2 hours, but the longer you can let them set the better. I know it will be hard to resist grabbing a low carb brownie right out of the oven, but you definitely want them to cool completely.

Then, once they've cooled, cut them up and enjoy the best fudgy keto brownies you'll ever have.

As far as storing these keto chocolate brownies goes, I recommend sealing them in an airtight container and leaving them out of the fridge. If you store them this way, they'll last for up to 4 days.

They're great the day you make them, but let me tell you guys, the next day they're INCREDIBLE.

That is how to make keto brownies that are so fudgy and decadent, but still sugar free and keto friendly!

This low carb brownie recipe is so easy to make and just so incredibly delicious. I seriously think these fudgy brownies might be one of the best keto desserts you can make. I'd put them right next to my keto chocolate chip cookies!

Honestly, I think they're the best brownies are a perfect low carb, sugar free, and gluten free substitute for regular brownies. But you'll have to make this low carb brownie recipe and see for yourself.

Well, I hope you enjoy these melt in your mouth coconut flour keto brownies! And if you do try them, let me know your thoughts in the comments below. 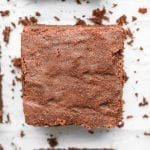 This keto brownies recipe makes incredibly rich, decadent, and fudgy keto brownies. You won't believe that each one has just 1.5 NET CARBS! And all you need to make them is coconut flour and just a few other simple keto ingredients.

Cut the butter up into tablespoon sized cubes, add the keto chocolate chips, and microwave until the butter melts - about 1 minute.

Next, use a spatula to combine the chocolate chips and butter into a chocolate sauce.

Now add the almond milk, and mix that into the sauce.

When the almond milk has combined, add the eggs, and combine those into the mixture as well.

At this point, you'll want to add the mixture to your food processor, and add all of the dry ingredients.

Once those are added, give them a quick mix, and scrape down the sides of the processor. ***DO NOT OVER MIX the ingredients.

After you scrape the sides, process the ingredients one last time.

Now, cover an 8x8 baking tray with parchment paper, coat it with baking spray, and add the brownie batter to the tray.

Then use a spatula to spread the batter out evenly in the tray.

Bake for around 30-35 minutes....you'll know they're done when you can insert a toothpick into them and it comes out dry. ***The toothpick doesn't have to come out clean, it just has to come out dry!

Let the brownies cool down to room temperature in the tray. I like to let them set for 2+ hours.

They will be extremely soft and "cakey" to the touch when they come out of the oven. But as they cool, they'll firm up, and the texture will become brownie like!

Store in an air-tight container for several days.

The Macros DO NOT include the "carbs" from Swerve. Swerve has 0 calories, so it should be tracked as 0 carbs. The FDA makes food companies list "sugar alcohols" as carbs, but that doesn't mean they should be tracked as such. That's why it's ALWAYS important to look at the calories of sweeteners and determine the true carb count FROM THE CALORIES!