These almond flour brownies are incredibly fudgy, chewy, and so easy to make. You'd never be able to tell that these are sugar free and gluten free with only 3 NET CARBS each!

Today I'll show you how to make the BEST almond flour Brownie recipe. These keto brownies are full of rich chocolatey deliciousness, they're chewy as can be, and they're so easy to make.

In about 30 minutes, you can have these fudgy almond flour brownies hot out of the oven and ready to eat!

And along with being low carb, they also have no gluten and no sugar! Healthy keto brownies with almond flour don't get any better than this. Well, if you want one that's low in calories, then my healthy brownie recipe might be better.

What I love about this recipe is that it's really easy to make and comes in clutch whenever you're craving something rich and chocolatey. I know it also satisfies my chocolate craving, and I think you'll find it to be just as satisfying.

So, to make one of the best gluten free brownie recipes, you'll only need a few simple ingredients.

And if you've made some of my other keto desserts or any of my almond flour recipes, then you probably have everything you need on hand.

Check out everything you'll need to make these fudgy keto brownies:

And if you have to make a trip to the store, stock up on the almond flour, chocolate chips, and confectioners erythritol. You can use them to make these keto and almond flour chocolate chip cookies and peanut butter cookies next!

Brownies are usually loaded with carbs. And that's mainly attributed to the fact that the average fudge brownie recipe uses ingredients like sugar, regular flour, and milk chocolate. All of which are filled with - you guessed it - carbs.

With that being said, it's easy to replace all of those ingredients with low carb keto friendly ingredients. And, it's also easy to make these keto brownies with almond flour taste just like regular brownies.

So, today's keto brownie recipe is made with almond flour, unsweetened cocoa powder, and confectioners erythritol. All of which have very few net carbs and no gluten.

In fact, this blanched almonds Flour By Kirkland's has just 2 net carbs per 28g. That's not only the lowest amount of net carbs I've seen for almond flour, but that's also 10x less net carbs than normal flour.

Oh, and if you want, you can also use cashew flour, sunflower seed flour, or walnut flour in place of the almond. Then they won't be keto brownies with almond flour, but they'll still be low carb!

Also, to keep the carbs even lower in these almond flour brownies I used a small amount of Unflavored Whey Protein Powder.

A lot of times you can replace some of the flour in a recipe with it, and save yourself some carbs. So, that's exactly what I did for today's low carb keto brownie recipe. If you don't have Unflavored Whey Protein - or don't want to buy it - just use more almond flour.

And if you pick up some of the protein powder, you can use it to make this almond flour french toast next!

So, the process of making these fudgy keto brownies is super simple. And if you ever made brownies before, it will be a breeze. But even if this is your first time, you'll still find it to be very easy.

Now get out all of the ingredients, and let's make the best keto brownies!

Now the butter and chocolate chips to a small bowl and melt them in the microwave in 2, 1-minute increments. You'll want to make sure to take it out and give it a stir after 1 minute, then microwave again until the chocolate and butter are completely melted.

Next, whisk the melted butter and sugar free chocolate chips until a chocolate sauce forms. Then when it does, add the almond flour, erythritol, cocoa powder, protein powder, and salt to the bowl and mix until a crumbly consistency forms.

Once it does, add and mix 1 egg at a time until all 4 eggs are incorporated into the ingredients and a brownie batter forms.

Now at this point, line an 8x8 dish with parchment paper and coat it with baking spray. Then add the batter to the dish, and evenly spread it out with a rubber spatula. And if you want, add some chopped walnuts on top.

Next bake the brownies for around 25 minutes. You'll know they are done when you can insert a toothpick into the center of the dish, and brownie residue is stuck to it. It's always better to slightly undercook the brownies if you want really fudgy brownies.

Finally, slice them into squares, and enjoy the gooey brownie!

How to Store brownies

So, this recipe for the best keto brownies will make about 9 brownies squares, the perfect amount to have some on hand for the week. Now, if your family is home when these come out hot from the oven, all of them will be gone before you even get a chance to grab seconds!

But if you do manage to save one or two, you can store them either in an airtight container or wrapped tightly with plastic wrap at room temperature for about 4 days.

And if you want to freeze the brownies to keep them around for longer, they'll last for about 3 months.

Wrapping it all up

That is how to make the most delicious keto chocolate brownies with healthy, wholesome ingredients. Everyone you share this amazing recipe with will love it! It's such a great recipe to make if you're hosting or just want to treat the family to some deliciousness.

These low carb brownies are so fudgy, so rich, have a perfect texture, and are just absolutely delicious!

I hope you like this gluten free recipe for the best brownies as much as I do. If you give it a try, leave a comment below and let me know what you think. And for more recipes like this one, make sure to check out my Instagram, TikTok, and Youtube channel!

If you liked this recipe and want to give some more brownie recipes a try, I have a ton on the blog that I think you'll enjoy!

Give one of these recipes a try next: 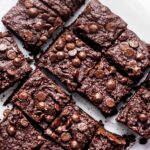 The BEST Keto Brownies! This Low Carb Brownie Recipe is fudgy, chewy, and so easy to make. All you need is almond flour, and just a few other ingredients to make these no sugar added brownies. Best of all, each keto brownie has just 3g of NET CARBS!

Macros DO NOT account for erythritol because it has 0 CALORIES, and should be tracked as 0 CARBS.