This keto biscuits and gravy recipe is so flavorful, so filling, and so easy to make. And when I say easy, I mean it! Seriously, all you need is 30 minutes to whip up these perfectly chewy and cheesy biscuits, and smother them in some homemade keto sausage gravy. Not to mention, each serving of this delicious low carb breakfast has just 4.5g NET CARBS!

THE BEST KETO BISCUITS AND GRAVY

When it comes to savory keto breakfast recipes, you just can't go wrong with this classic southern staple.

I mean, can you think of a better way to start your day than with warm and fluffy biscuits topped with creamy gravy?!

That said, this low carb biscuits and gravy recipe tastes almost just like the "real" thing. The cheddar cheese biscuits are tender and buttery, and the sausage gravy is incredibly rich, thick, creamy, and flavorful.

How good does that sound?

Oh, and did I mention that each serving has literally just 4.5g NET CARBS?!

Pretty amazing when you consider that "regular" biscuits and gravy can run you as much as 85g CARBS per serving!

By the way, if you're looking for some other keto breakfast ideas, I recommend trying out my keto french toast, and my 5-minute keto cinnamon rolls. They're definitely a fan favorite!

INGREDIENTS FOR KETO BISCUITS AND GRAVY

So, this recipe uses some common staple keto ingredients.

In fact, you probably have a lot of them in your pantry/fridge already.

That said, to make the keto biscuits, you'll need:

And for the keto sausage gravy:

Oh, and if you can't get enough of these classic southern biscuits, you can actually use a lot of the same ingredients to make my keto biscuits recipe.

They're just as deliciously addictive, they're super customizable, and they're incredibly versatile too.

KETO FRIENDLY FLOURS TO USE & AVOID

Ok, so, as you know, eating "regular" biscuits and gravy are a no-go for keto because of their high carb count.

I mean, biscuits are typically made with all-purpose flour - which contains 95 grams of carbs per cup - and that's definitely not keto-friendly.

So, to keep the biscuits filling and fluffy, while also staying low carb, we'll be using both coconut flour and almond flour.

That said, I've mentioned a few times on the blog how coconut flour isn't an ideal substitute for almond flour because it is highly absorbent and can create a dry and crumbly texture. And, while that's still true, we'll be using the properties of coconut flour to our advantage in this recipe .

The texture the coconut flour adds to the biscuits helps soak up all those rich flavors from the creamy sausage gravy, and mixing it with almond flour will allow the biscuits to stay soft and flakey.

Again, though, the ratios of coconut flour and almond flour used in this recipe are already perfect. If you try to add more coconut flour in place of almond flour, your biscuits might become too dry and fall apart...if they even turn out at all.

Keto Friendly Flours To Use

So, if you want to substitute out almond flour in this recipe, I recommend using either walnut flour or sunflower seed flour in its place.

These flours are excellent low carb keto friendly flours, and you can substitute almond flour for them at a 1:1 ratio. Basically, they're perfectly interchangeable.

GRATE YOUR OWN CHEESE

Now, as I mentioned above, we're going to be using shredded cheddar cheese to add a cheesy flavorful touch to the biscuits.

But, keep in mind, that pre-shredded cheeses typically have added starches to prevent "caking & sticking," and these starches contain carbs.

So, as always, I recommend shredding your own cheese, since this will save you the added carbs that come in pre-shredded cheeses.

HOW TO MAKE KETO BISCUITS AND GRAVY

Now that we have our ingredients set for this recipe, let's get into how to make it.

And don't worry about anything being too complicated. Both the keto biscuits and low carb sausage gravy recipes are really straightforward and easy to make.

Also, I know you'll want to get these on the breakfast table ASAP, so we'll save time by preparing the gravy while the biscuits are baking.

That said, let's go over the steps you'll want to follow.

Then, you'll want to line a baking sheet with parchment paper and coat it with non-stick baking spray.

Then, in a separate bowl, mix the eggs and butter, and pour them into the dry ingredients.

So, once you've added the wet ingredients into the dry ones, you'll want to mix them together until a dough forms out of them.

Now, once they're combined, you'll want to use your hands to shape the dough into 6 equally-sized biscuits, and then arrange them onto the baking sheet. Now you can pop them in the oven, and let them bake for around 15 minutes.

So, while you're waiting for the biscuits to cook, you'll want to prepare the gravy.

And, to do that, you'll want to coat a large non-stick pan - or cast-iron skillet - with cooking spray, and cook the sausage on medium-high heat until browned.

Then, when that's browned appropriately, you'll want to stir in the broth and cream cheese.

Now, you'll want to bring the gravy to a low boil, reduce the heat to low, and let it simmer to thicken.

Also, while the gravy is simmering, you'll want to occasionally stir it. And, by the way, just so you know, the gravy should take just about 5-10 minutes to thicken up.

The biscuits and gravy should be ready around the same time.

So, just put the number of biscuits you'd like on a plate, pour the gravy on top, and enjoy!

STORING YOUR KETO BISCUITS AND GRAVY

Ok, so this recipe makes 6 keto biscuits - and enough sausage gravy to top each one of them - giving you a perfect meal-prep breakfast!

That said, the biscuits will stay fresh at room temperature for 1 to 2 days. You'll want to cover them with tin foil or plastic wrap before storing them though.

However, if you'd like them to last for a little longer, store the biscuits in the fridge. They'll stay good for up to a week in there.

And if you want to recreate the same hot out of the oven taste, you can heat your biscuits in the microwave for 20-40 seconds or warm them in the toaster oven for a few minutes.

Having said that, if you decide to heat them in the microwave, make sure to wrap your biscuits in a damp paper towel so that they retain their flakiness.

By the way, if you want these biscuits to last even longer, you can store them in the freezer for 2-3 months. Just wrap each biscuit individually with heavy-duty foil or plastic wrap, and then put them in a freezer bag or airtight container.

Then, to reheat your frozen biscuits, just transfer them to a baking sheet and bake in the oven at 350°F for 15-20 minutes.

So, the gravy will last in the fridge in an airtight container for up to 5 days.

However, if you want to make sure you always have some keto gravy on hand, you can store it in the freezer for 4-6 months.

That said, to reheat the gravy, you'll want to put it in a saucepan on the stove over low heat. And as it heats up, you'll want to consistently stir it so that it reheats evenly.

You can also reheat the gravy in the microwave. If you do this, take it out and stir every 30 seconds until it reaches your desired temperature.

Now, no matter which way you reheat it, the gravy may be quite thick. So, if that's the case, just mix in some water or broth to thin it out.

Once again, one serving – or one biscuit covered in gravy – comes out to just 4.5g NET CARBS.

And the recipe makes 6 keto biscuits and about 2 cups of keto sausage gravy to divide among the 6 servings.

That said, the full nutritional breakdown per serving is as follows:

And that's how you turn savory biscuits and gravy keto!

I hope this classic southern breakfast helps you start your day off on the right foot!

If you try it, be sure to let me know what you think in the comments.

Now, this keto biscuits and gravy recipe is definitely one of the best keto breakfast recipes out there...but here are some of my other favorites: 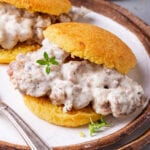 This keto biscuits and gravy recipe is so flavorful, so filling, and so easy to make. And when I say easy, I mean it! Seriously, all you need is 30 minutes to whip up these perfectly chewy and cheesy biscuits, and smother them in some homemade keto sausage gravy. Not to mention, each serving of this delicious low carb breakfast has just 4.5g NET CARBS!