This keto cinnamon swirl bread is like a cinnamon raisin bread just without the raisins. It's tender, buttery, super moist, filled with a cinnamon "sugar" swirl, and has an out-of-this-world sugar free glaze on top of it. Honestly, when you taste it, you'd never guess that this is a low carb, gluten free, keto bread. And best of all, each slice has just over 1 NET CARB per slice!

So, I created this keto cinnamon swirl bread, and the results did not disappoint.

This low carb cinnamon bread literally tastes like the one you can buy at the store, but it is way healthier, and has over ten times fewer carbs (it has 1.5 NET CARB per slice)!

It has the ideal bready texture with a cinnamon swirl mixture in the middle that is totally sugar free. Then to make it even better, I added a sugar free glaze that gives this keto bread recipe a cinnamon roll vibe.

Plus, this is a no knead keto bread recipe - just like this Keto Nut Butter Bread. All you have to do is mix the ingredients - which will take just 5-10 minutes - and then let the oven take care of the rest.

Here's everything you'll need for this low carb bread:

For the cinnamon "sugar" swirl mix (middle of the bread):

And for the optional glaze:

Pretty simple stuff if you've been following the keto diet for a while, eh?!

But even if you haven't, make sure to pick up all of these ingredients! You can use all of them to make my 5-Minute Keto Cinnamon Rolls and Keto Coffee Cake recipes next.

Ok, so to make this bread recipe low carb and gluten free, I used almond flour as the base of it.

I love using almond flour since it's so healthy, low in carbs, and captures the same texture regular white flour does in recipes.

But, if you don't want to use almond flour - or are curious about some substitutes - you can use an equal amount of walnut flour or sunflower seed flour in its place.

Both are also super healthy, low carb, and gluten free flours that work well as a substitute for regular flour.

KETO FRIENDLY SUGAR SUBSTITUTES TO USE

Now, to give this keto bread recipe the necessary sugary flavor - in the bread and the swirl - I used my go-to keto sweetener - Swerve.

Swerve is an erythritol-based sweetener with zero calories, and zero net carbs, and it has the same sweetness as regular sugar. With that said, for the bread, I used the Confectioners Swerve, and for the swirl, I used the Granular Swerve.

And not only are these sweeteners ideal for this cinnamon swirl bread, but they are the perfect sugar substitute for any keto recipe if you want to keep it low carb and sugar free. I use Swerve in pretty much every single one of my Keto Dessert Recipes!

HOW TO MAKE KETO CINNAMON BREAD

Now, as I mentioned earlier, this is a no knead keto bread recipe, so the process of making it is super easy.

And, all in all, it will take only about 5-10 minutes to prepare, and then you just have to bake the bread for about an hour before letting it cool, and devouring it.

So, get out all of your ingredients, and let's get baking!

Next, add the almond flour, confectioners swerve, baking powder, ground cinnamon, and salt to a large bowl and mix well to combine them into a dry ingredient mixture.

Then take out a medium-sized bowl, add the eggs, melted butter, and almond milk, and whisk everything until well combined to make the wet ingredient mixture.

Now, pour the wet ingredient mixture into the large bowl of dry ingredients and mix everything until a thick batter forms. And when it does, set the bowl aside, and you can make the swirl.

For the swirl, add the cinnamon and granular swerve into a small bowl and mix them to combine.

Next, line an 8.5" x 4.5" bread pan with parchment paper and coat it with baking spray.

Then, add ⅓ of the batter to it, sprinkle ⅓ of the cinnamon sugar on top, and use a toothpick to work the cinnamon mixture back and forth into the batter. Now, after you've done that you'll want to repeat that same process, and then cover that second cinnamon sugar topping with the remaining batter you have.

Now, put the bread in the oven and bake for around 60-70 minutes. And at the 45-minute mark, tent the bread with tin foil.

STEP 4: FINISHING IT OFF

So, once the bread is done baking, let it cool down in the pan - I like to let it cool overnight, but if you want this bread ASAP, just allow it to cool to room temp.

Then, once it's cooled down, add the confectioners swerve and almond milk in a bowl and mix them to make the glaze.

Lastly, drizzle the glaze over the top of the bread, slice it into 12 slices, and enjoy!

So, depending on how you cut it, you'll have about 12-14 slices of this irresistible homemade keto cinnamon bread. And it stores super well, so you'll have a whole lot of deliciousness to look forward to for breakfast for the week.

With that said, you can store this bread in an airtight container on the counter for a few days, in the fridge for up to 5 days, or in the freezer for up to 3 months.

If you end up freezing it, just let it thaw at room temperature before enjoying it, or you can even put it right in the toaster oven or microwave for a few seconds.

Well, that is how to make cinnamon sugar bread keto friendly!

It's basically a dessert in the form of bread, but it has just over 1 NET CARB per slice, is gluten free, and pretty darn healthy for bread.

And if you have kids, they'll love this sugar free cinnamon swirl bread just as much as you - maybe even more - and it makes a great breakfast to power them through the day!

Well, I hope you enjoy this keto bread recipe as much I do.

If you end up trying it, leave a comment below and let me know what you think!

This is a super easy keto bread recipe, and I have a ton of other ones on the blog that you have to try out!

So make one of these keto breads next:

And if you're looking for all of the best low carb bread you can buy at the grocery store, check this keto bread list out. 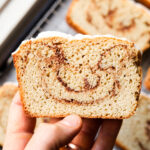 This keto cinnamon swirl bread is like a cinnamon roll in bread form. It's tender, buttery, filled with a cinnamon "sugar" swirl, and has a sugar free glaze on top. You'd never guess that this gluten free, low carb, and keto bread has just over 1 NET CARB per slice!